Read First if this Blog Makes No Sense 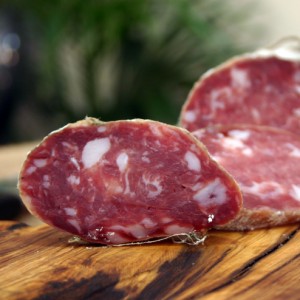 If the salami we make ends up looking anything like this, we will be both surprised and pleased

All food has water.  In truth, water is a make-or-break component in food.  Too much, and you run the risk of mold, yeast, and bacteria growing.  Too little, and food tastes bad.  But how do you know if you have the right amount of water in your tuscan salami?  I wondered this while reading “Charcuterie“, an engrossing and relatively well-known book by Michael Ruhlman and Brian Polcyn.  Although the book offers three ways to know that a dry-cured sausage is “done”  (texture, smell, and moisture content), none of these are exact sciences.

Not surprisingly, the best way to get the water activity of a cured meat into a safe range is by adding salt, and removing water.  Salt loves water, and quickly binds it up, making the water less “active”.  Air-drying removes water from the meat, which also makes the remaining water less energetic.  How much lower will the water activity be if a Parma Ham looses 5% of its water? We don’t know without doing the experiment, but the effect of water loss on water activity is different for each cured meat (this is one reason that using moisture content to judge “done-ness” is risky).

Next question.  Why do we know such geeky and obscure things about food chemistry?  We make water activity meters for a living.  These meters are used by companies like Kraft and Nestle to measure the water activity of their products.

Do you need to measure water activity to make tasty and safe cured meats?  Of course not – humans have been curing meat for a really long time, and water activity meters only showed up about 40 years ago (Decagon has been making them since 1987).  But now that we have these tools, we can see exactly when a cured meat is “done”, and explain why it’s safe.   On this blog, we’ll make products from the Ruhlman/Polcyn book and one other (Great Sausage Recipes and Meat Curing by Rytek Kutas). While we do it, we’ll measure the water activity to see how it changes during curing and air drying.  To start with, we’ll try to make a few of the basics (Salt Air Dried Ham, Tuscan Salami, Pancetta, etc.).  We’re sure to end up with some interesting data.  We may just end up with some tasty cured meat in the process, but that’s a risk we’re willing to take.