So the tuscan salami was drying nicely in the fridge as of Thursday, the 24th of March.  After finally seeing the mixing and stuffing process through with that recipe, I quickly made two more in rapid succession: Saucisson Sec and Spanish Chorizo.  I put these in the fridge on Friday, March 26.  I must admit, my plan went a little wrong at that point, because I left town the next day for a week of vacation with my family over spring break.  My workmates Brady and Laurent were going to test the sausage’s water activity on Tuesday and Friday of the following week.  On Tuesday, things apparently looked good.  On Friday, they did not: 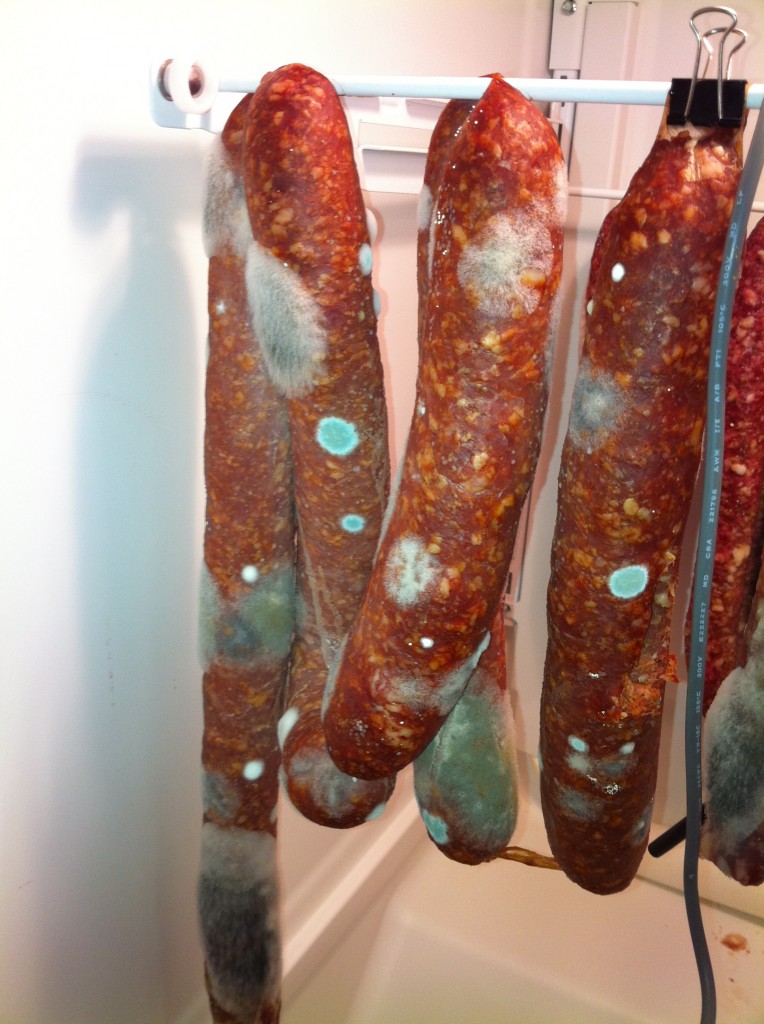 So what did we learn here?  We have some pretty damning clues, now that I have started looking for them.  The first was that the salt solution I was using had a water activity of 0.75 – so it was supposed to control humidity at 75%, which is above the 60-70% recommended by the book.  I saw that initially, the solution only brought the humidity of the fridge up to 71%, and thought that would be ok.  The second clue can be seen in the below chart: 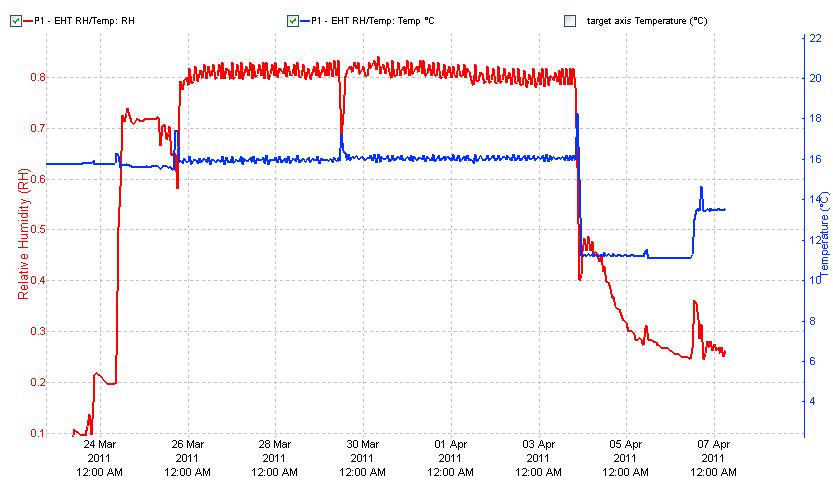 The chart shows that things were going ok until Friday evening (3/25) when I slotted two more batches of sausage into the fridge, essentially tripling the amount of drying meat.  Those two batches, combined with the 0.75 aw salt solution brought the fridge humidity up to (at its highest point) 84%, and it stayed there all week.  I think this is the problem – humidity was too high for too long.  When the meat was checked on Tuesday(3/29), there didn’t appear to be a big issue.  The next time the fridge was opened (4/1) we discovered a mold blitzkrieg.  Not all of the sausage was molded, though, so we threw away most of it, but saved a couple of links from each batch that were fine.  I removed the salt solution from the fridge, and dropped the temperature a bit just to be safe as well.  The red and blue lines came down quickly after I did that.

Reading up on mold in our trusty Charcuterie book yielded some advice: “Fuzzy mold (usually it has a greenish cast) can even dig through the casing and damage the interior; if you find evidence of it, to be cautious, throw the sausage away and try again.”  From the Handbook of Fermented Meat and Poultry we learn that “recent findings showing that many of the Penicillus and Aspergillus species frequently found on the surface of dry sausages have the ability to product mycotoxins in the actual product, have stressed the importance of possibly controlling contaminating molds on raw sausages during ripening by using mold starters.”  This suggests a remedy not explored in “Charcuterie” – inoculating the surface of the sausage with good mold spores (P. nalgiovense) prior to curing.  That, combined with better humidity control, will be our game plan with the next batch.

In the meantime, we still have survivor sausages curing in the fridge, and will report on their water activity values soon.