It’s been 18 days since we put the tuscan salami into the fridge to ferment.  This, according to the good book, is the outer bound of “doneness”.  One look at the product confirms this: 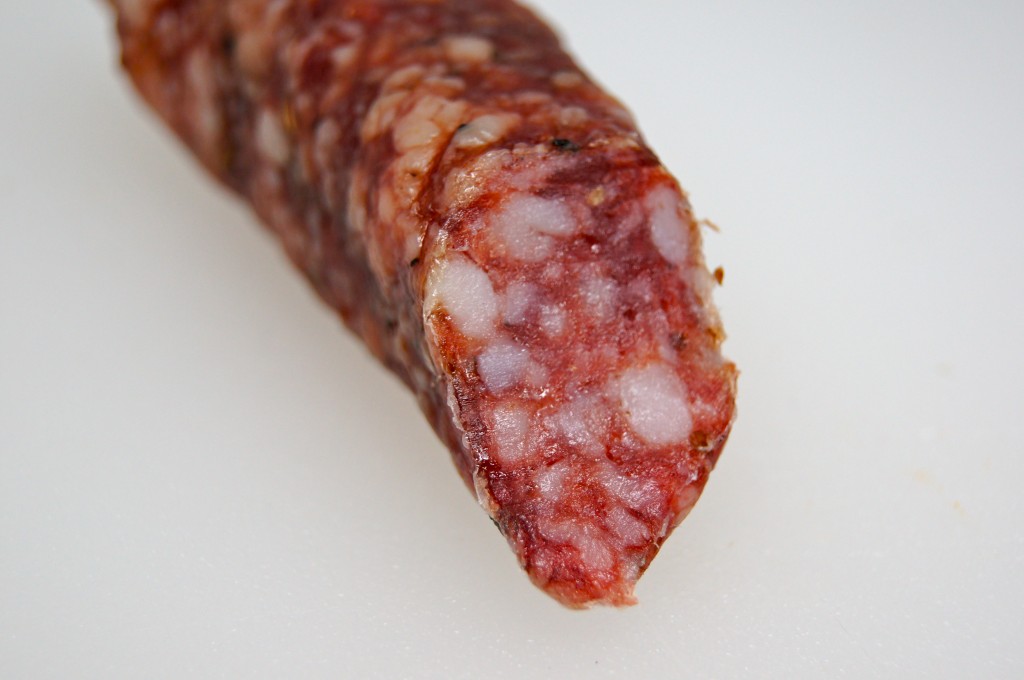 The square-ish shape is kind of weird, and it’s very hard to the touch.  In truth, we have been eating it for the past 6 days, though, so we assumed it was done.  When we tested the water activity on day 12, it read 0.85 aw, meaning it is safe from microbial growth, and could be stored at room temperature.  Today (day 18) the product read 0.782, meaning the salami has continued to dry quickly.  To me, the fermentation combined with the pork, fat, and fennel/pepper makes for a tangy, crowd-pleasing sausage.

For the people that tried all three, this was their favorite – spicy but not too hot, with an appropriate amount of tang (I refer to the taste and not the powdered drink).  This recipe had the least amount of fat in it by weight, which is apparent from its appearance.  The two sausages of this variety that survived the mold debacle were quite different in diameter.  Mostly this is because I don’t have any chops when it comes to stuffing sausage.  That raised two questions – did the thicker sausage dry slower, and was the center of the thicker sausage “wetter” than the sausage as a whole.  The answer to both these questions was “yes”.  The skinnier sausage had a water activity of 0.833, indicating it’s done.  The thicker sausage had a water activity of 0.88, meaning it’s drying slower and probably isn’t done.  We extracted just the center (core) of a slice of the larger sausage, and its water activity was 0.91 – not even close to done.  This suggests that thicker sausage needs more curing time (not surprising) but it also tells us we should hurry up and get some of that good mold on our sausage – it’s reported to regulate the drying process, and that’s something we apparently need.  You can see on the chorizo picture the outside is darker in color than the inside – it would be nice if everything were the same color.

Lastly, the somewhat unloved saucisson sec.  This sausage is still quite high in water activity (0.880) and isn’t coming down very fast – it was at 0.895 about a week ago.  This may be because it’s so high in fat, and it has no bactoferm in it.  The chorizo and salami have certainly dried out much faster.  I personally like this sausage the best because of its mild porky flavor, but other taste testers derided it as soft, greasy, and weak.  Here’s how it looks: 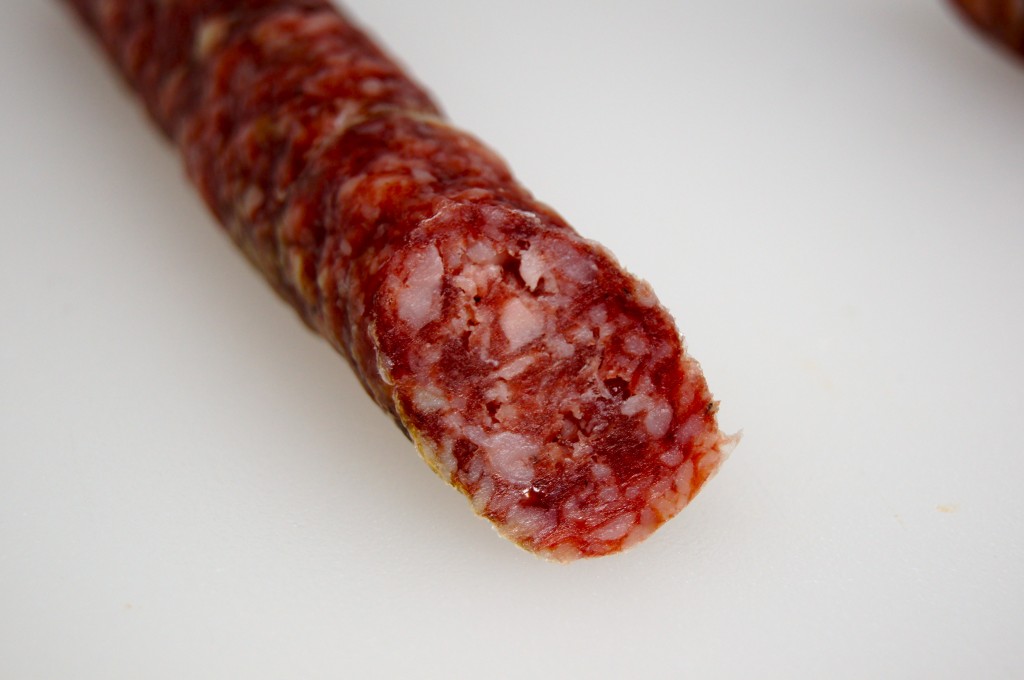 Notice the sausage hasn’t really firmed up either – there are still gaps in it, which I don’t think has anything to do with how they were stuffed since the other varieties (stuffed with a similar level of incompetence) showed no such problems.   I’m still going to leave the sausage drying to see how it will progress, but it’s clear the saucisson sec will need more time to be done.