When we started to see the water activity of the sausage climb up, in defiance of thermodynamic laws that say it should decline if RH is below the water activity, we knew we’d need to talk about sampling.  Getting a representative sample is tricky and sometimes frustrating.  Fermented sausages all dry in an uneven pattern – the inside is “wetter” than the outside.  I settled on slicing a 1/8-1/4 inch piece off of the sausage, and then taking another similarly-sized slice, which is the one I would put into our water activity meter.  We’ve seen that the closer my slices get to the middle of the sausage, the higher the water activity values.  This means I’m not plotting the drying process as much as I am the variability in water activity of a 1″ cylinder of fermenting meat.

Here’s an experiment we did yesterday to illustrate.  We took one of Landjager, and cut 5 slices off .  We tested each of the five slices, and this is what we saw (disclosure: I ate all 5 slices after testing, and they were tasty): 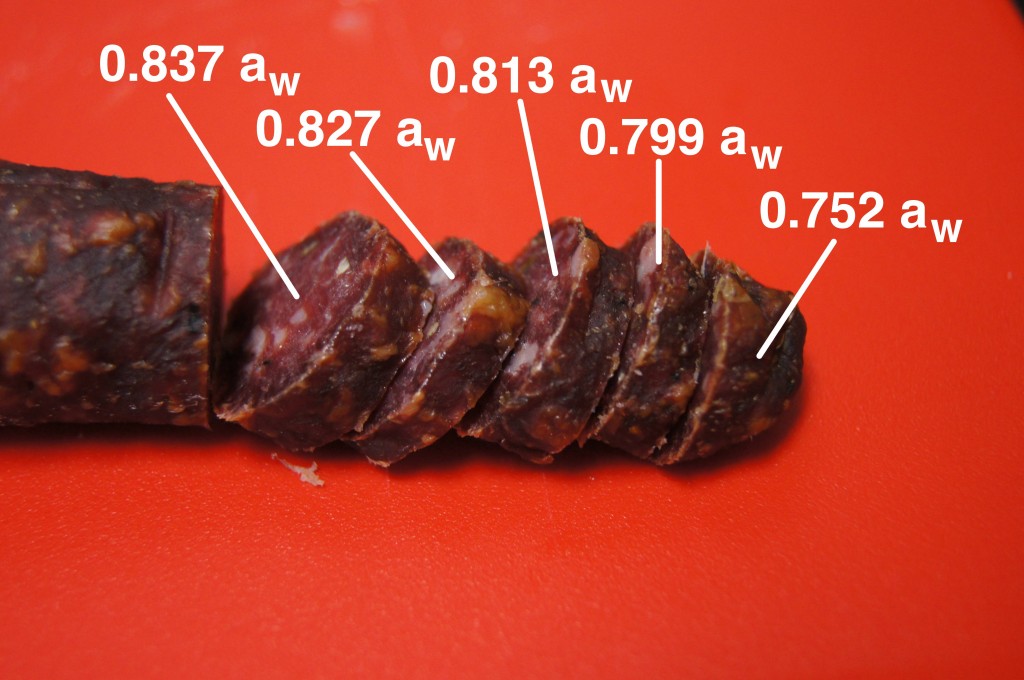 The nub at the end has significantly more surface area, and showed the lowest water activity (aw) by far.  As we got closer to the center of the sausage, the water activity increased significantly, indicating that even a full inch into the sausage, the “sausage end effect” still influenced aw.  This made us curious about what would happen if we did this test on the entire sausage.  More on that later.