Between watching my first batch go moldy, lugging around an 86 lb. grinder, enduring bewildered looks from co-workers, and smelling like smoke, I’ve sometimes taken a quiet moment to wonder if charcuterie isn’t best left to the pros. I’d also wondered what real charcuterie should taste like. I’ve had some quality salami/prosciutto before, but it’s been a long time. Nobody sells the really good stuff in Pullman – the best we’ve got is a few sticks of Gallo salami lost in the grocer’s refrigerator case amongst a sea of Letterman-style canned hams.

Anyway, in order to satisfy my curiosity on a number of fronts, I place an order with Salumi, an outfit with at least some street cred, having been mentioned by Rhulman in Charcuterie. It took a while, but a box full of six different kinds of cured meats arrived today. This is what they looked like hanging in my cubicle: 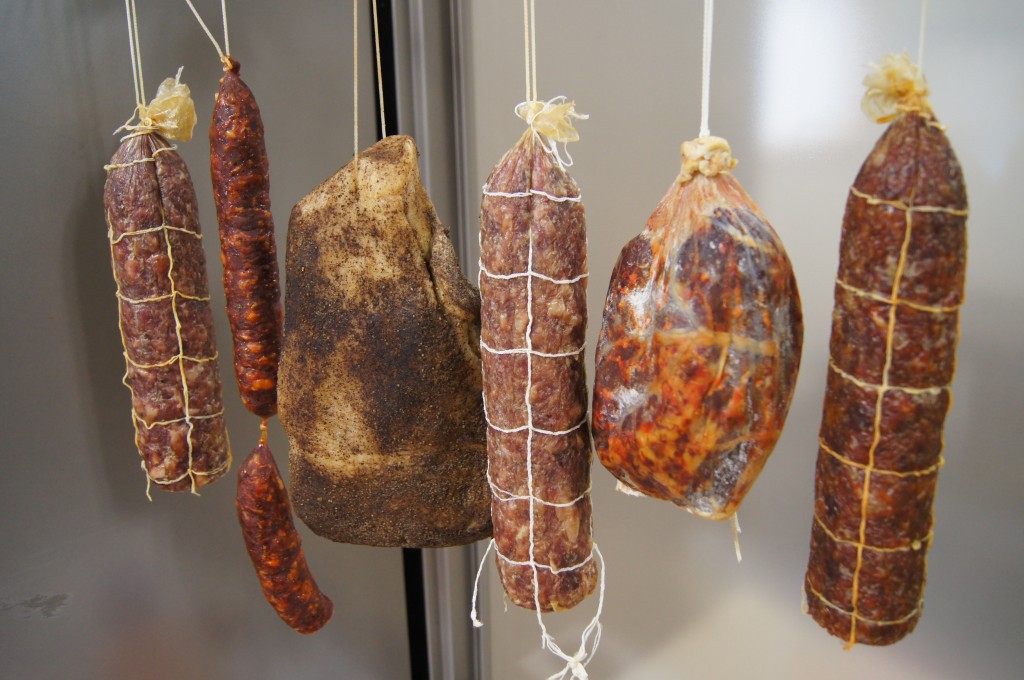 – Although I had imagined the gap between home charcuterie and real professionals to be huge, it’s bigger than I thought.

– I haven’t been drying the sausage enough. All of the meats were rock solid, having almost no give when pressed forcefully with a thumb. Notable exception was the Guanciale, which is almost all fat.

– Neither mold nor natural casings are required to make good meat. There was almost no mold on any of the products, and all the 2″ diameter salamis were encased in what appeared to be cellulose.

I had ordered Coppa, Salumi Salami, Da Vino, Guanciale, Smoked Paprika, and Hot Soppressata. I immediately ran water activity tests on all of the products and found the following: Coppa = 0.713 aw, Salumi Salami = 0.713 aw, Da Vino = 0.710 aw, Guanciale = 0.682 aw, Smoked Paprika = 0.700 aw, and Hot Soppressata = 0.710 aw. This was stunning – their ability to control the moisture of their product so tightly blew me away. It also lets me “cheat” by knowing what water activity I should shoot for on future batches.

I’ll get around to doing more nerdy analyses on the products in future posts, but you may just want to know how the products tasted. I’d hoped that there would be certain similarities between my homemade products and the real stuff. Turns out, they’re not that alike. The Salumi products were definitely more sophisticated and complex, all the while elevating the natural flavor of the pig itself. Really amazing. Like I said, more to come later.