Now that I had copious quantities of salami, I thought my workmates would find me a selfish jerk if I didn’t bust out some large platters with thin sliced meat and crusty bread. So I did. I have a little meat slicer I brought from home and last Friday morning, I began to carve up the pieces from Salumi. Note on the meat slicer: just because it has suction cup for feet doesn’t
mean it won’t slide all over the counter like a hockey puck on ice. This was very annoying.

A couple of thoughts on the products. My favorite was the Coppa – the chewy exterior studded with red pepper flakes balanced the milder center nicely, and there was none of the stringiness that sometimes dogs prosciutto. I also loved each of the salamis, but the Da Vino was the star for me. The sweetness and saltiness played off each other skillfully. The only one I wasn’t crazy about was the smoked paprika sausage. Anyway here’s the Coppa, center sliced: 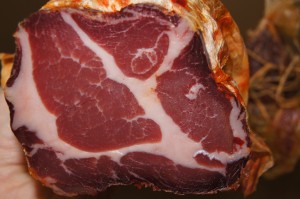 This is the Salumi Salami: 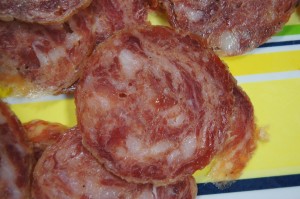 This is the Hot Soppressata: 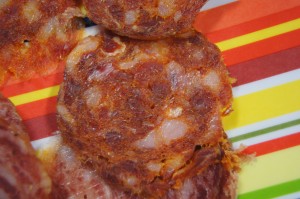 Once I tested the center cut slices for water activity, they were all considerably higher than the exterior sliced I tested when they arrived.  There was also  variability between the different varieties, with the lowest being the Hot Soppressata at 0.748 aw, and the highest was the Coppa at 0.902 aw. Note that Salumi says the products should be hung at 70f out in the room, but the Coppa water activity is too high to do this. After you cut it, into the fridge.

This week, I’m in Europe on business. I’ll try to buy, and test some local product, posting the results here on the blog.