Today we met with our Italian distributor at their headquarters in Perugia, Italy. After discussing a number of items, we took the chance to show them the blog. Needless to say, my profile of French charcuterie led them to express vast skepticism about French contributions to the field of fermented meats. After our meetings were done, they whisked Carlos and me off to Gaggi & Gaggi, reportedly the best dried meat seller in Perugia. Walking in, it looked like a regular supermarket. As we got back inside, it didn’t: 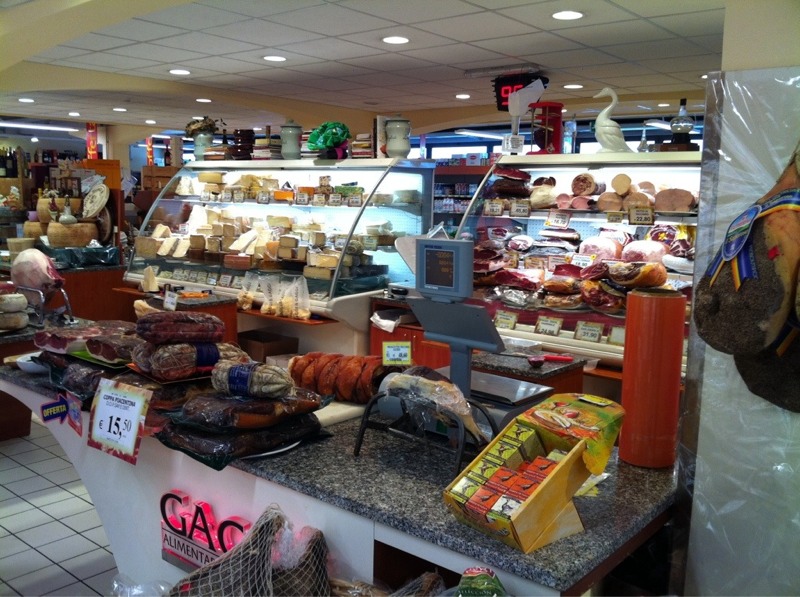 The different varieties were mind-boggling. I saw a 1 foot diameter by 6″ thick disk-shaped sausage that must take more than a year to dry. The butcher, a personal friend of our hosts, doled out samples of everything. In the end, our gracious hosts bought us a small quantity of 3 kinds of cheese, and 4 kinds of meat. Just looking around at the bins of products was interesting: 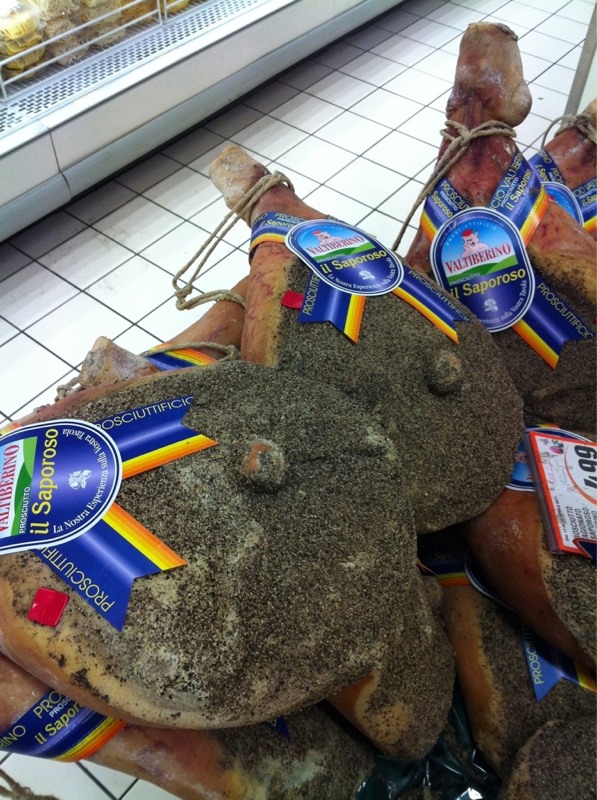 Those are whole cured hams packed with pepper.

On our way back to Rome to catch a flight, we tested the water activity of our products. 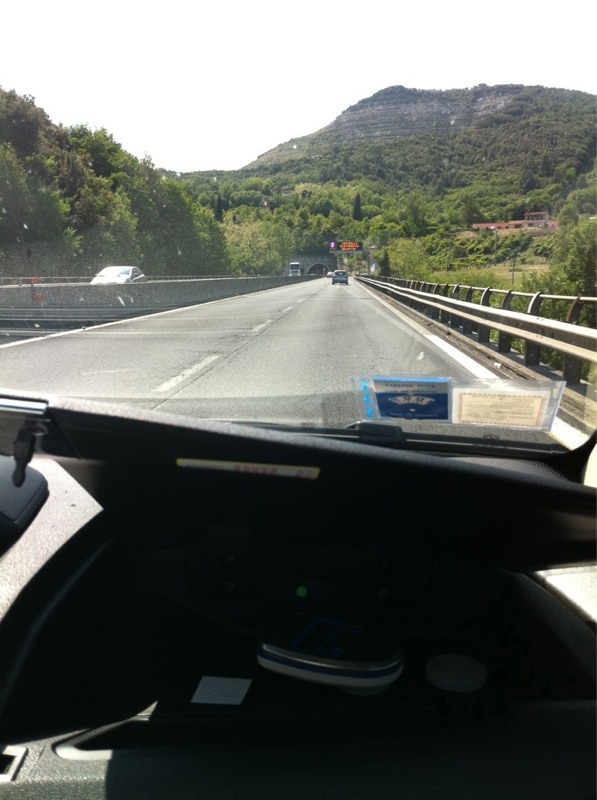 You can kind of see the Pawkit there in a compartment in the dash apparently made to accommodate mobile water activity testing. Turns out we got 3 different kinds of Pecorino cheese, so those numbers will be indistinguishable from each other:

What did we learn? Water activity probably influences mouth feel a lot. The two drier varieties of Pecorino had similar taste, but the higher one was very different – softer with stronger flavors. Here’s what one of the slices of Pecorino looked like: 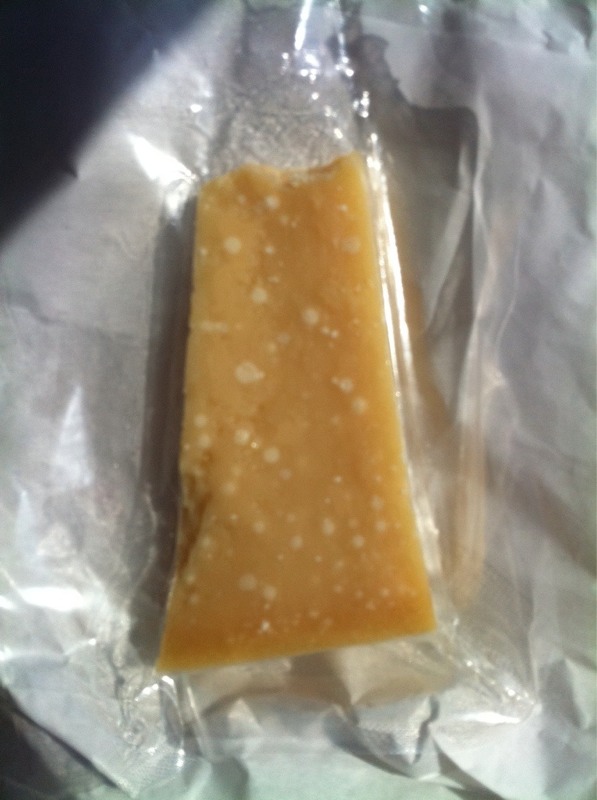 The Mortadella we pretty much expected to be really high, and it was: 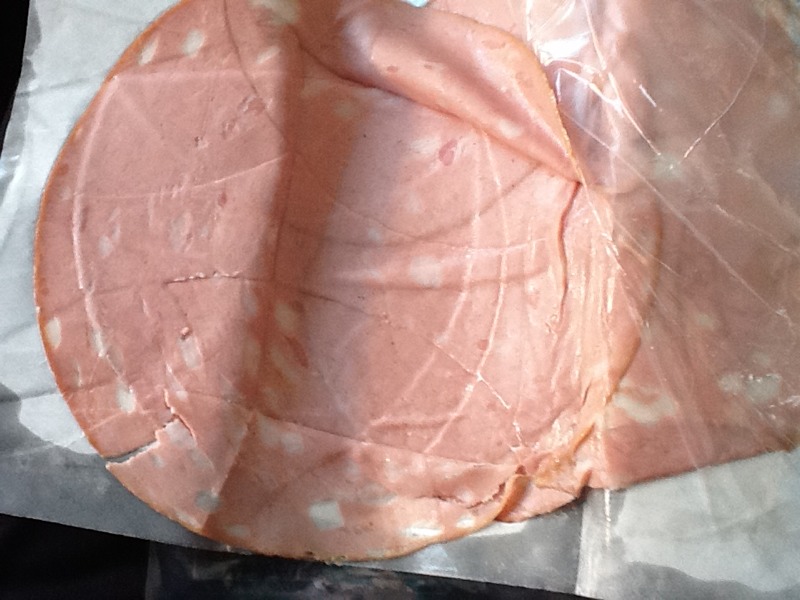 It’s not dried at all, so no surprise there. It tasted like really nice processed meat, which is pretty much what it is.

The prosciutto is local to Perugia, and is easily the best I’ve ever tasted, and looked better than the pic would indicate: 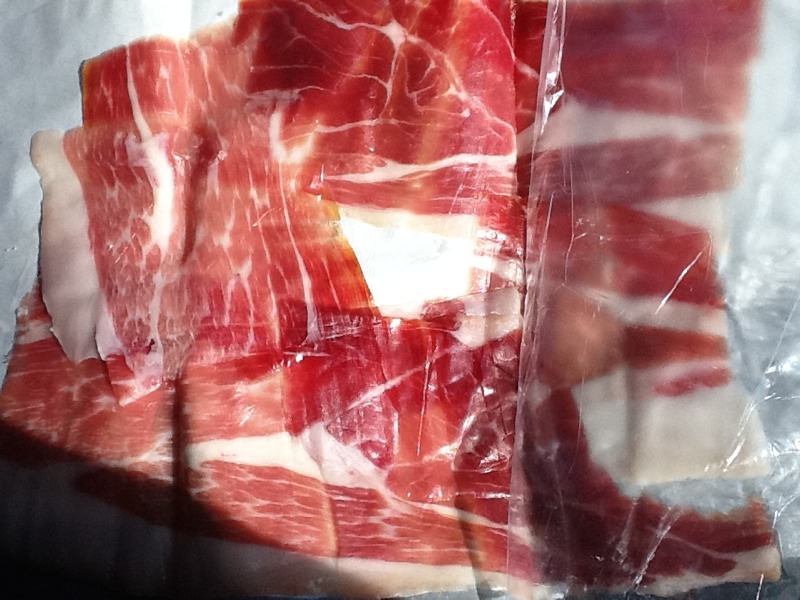 The Coppa was similarly splendid, and reminded me a lot of the Salumi Coppa I had last week: 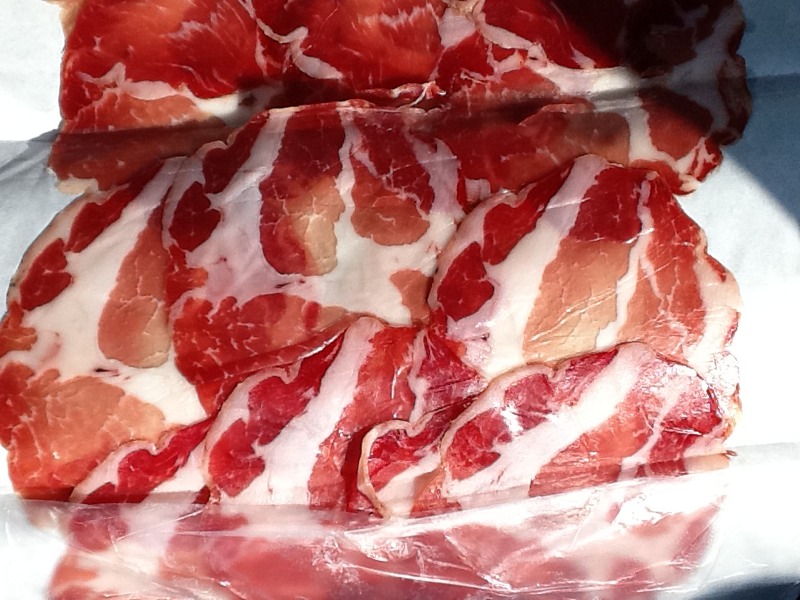 It’s strange that it’s water activity was so much lower, though. Salumi’s Coppa was around 0.9 aw, while this was at 0.84. Don’t know why there is such a big difference.

By far the funkiest piece of meat was the Salsicce Secche, which I think just means “dried sausage”: 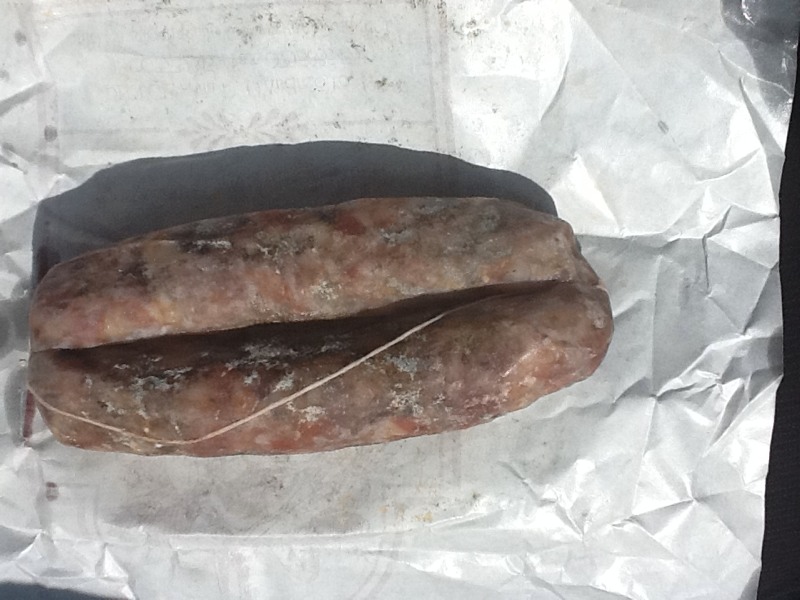 The aroma coming off these bad boys was a little concerning – smelled more like yeast than meat. The product had me totally confused – the sausage is soft, and extremely mild – tasted like it was seasoned with just a little salt. The fat spread the taste of the pork around my mouth, and it wasn’t bad, just different. Add that to the fact that it’s water activity is lower than other sausages that are way harder to the touch, and I really didn’t know what was going on. Neither the drying nor the salt content would predict such a low water activity.

One last thing – our hosts took us out to eat for lunch. As usual, it was amazing. The antipasti alone would’ve made a meal: 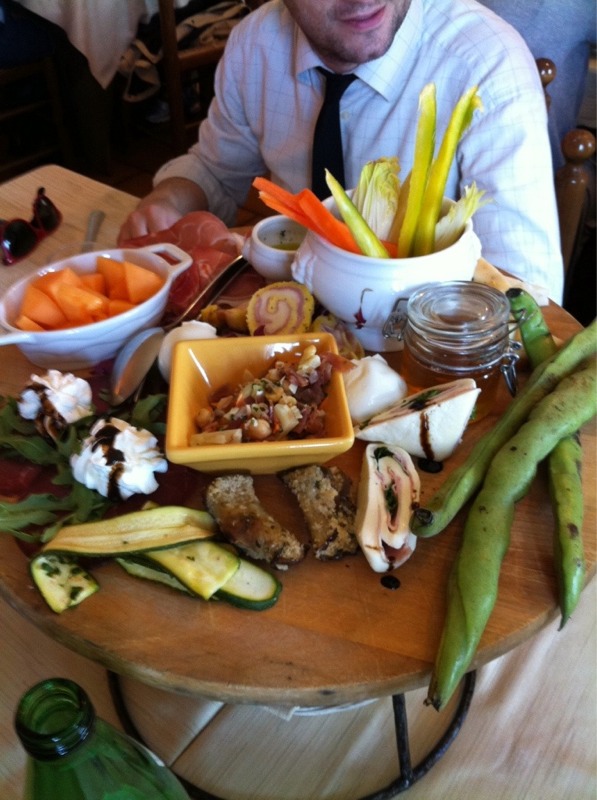 What you see to the left in the picture in front of the cantaloupe is slices of prosciutto topped with whipped goat cheese, arugula, and balsamic vinegar. It was really great. Upon leaving, we saw b&w pics like you might see plastered all over Buca De Beppo. Anyway, they pretty much sum up my experience: 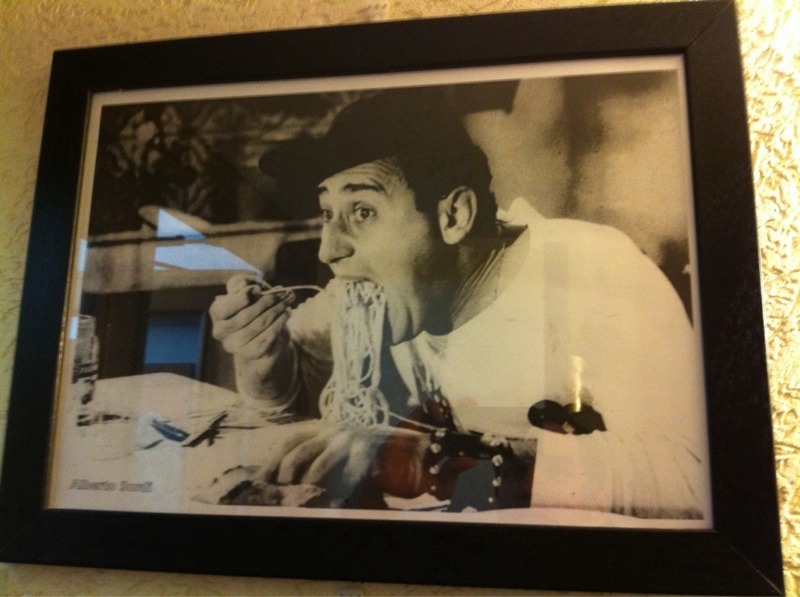 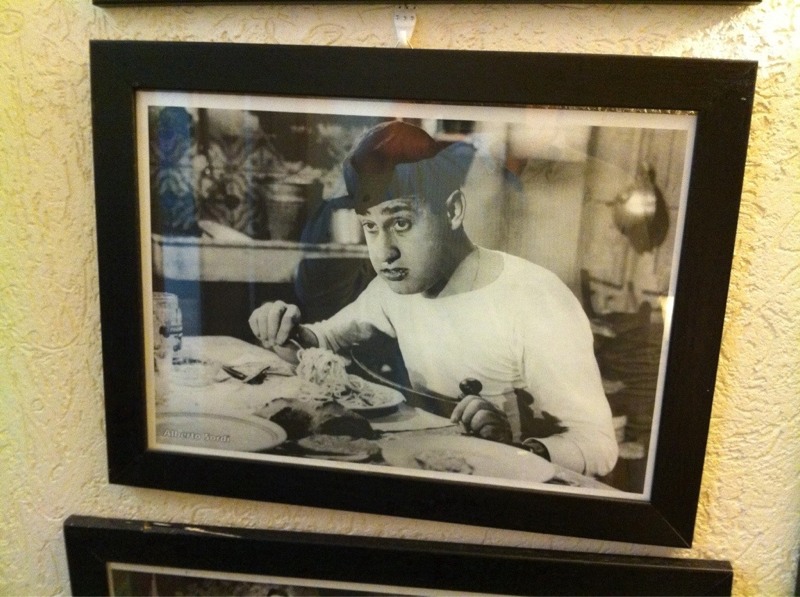 While walking out, I considered the ramifications of returning home with a herniated navel. This short trip is almost done, but it’ll be good to get back to the sausage drying at home.