Prosciutto – one week in.

We’re one week in on the salt cure for the prosciutto and the molasses ham.

The prosciutto is coated with a thick layer of course salt. It has flattened on the top and the bottom because of the 15 lbs of weight resting over it. The meat feels firm and dense to the touch, but lighter in weight than I remembered.  I’m curious how much the ham will weigh after the salt cure is complete and the salt removed.

To test the water activity, I cleaned the salt from a small spot on the surface of the ham, inserted the biopsy needle to the desired one inch depth, and collected a sample as seen below.

Tests were taken at approximately 1 inch and 3 inch depths.  3 inches is about half way through the ham.   Near the surface, at one inch, the water activity was 0.940, a large drop from the original water activity a week early of 0.993.   The center of the ham, however, had hardly changed at all with a water activity of 0.990.

Note that Scott’s pancetta had dropped all the way down to 0.88 aw after a week or so of curing in salt.  The hams seem to be curing more slowly, perhaps simply because they are so much larger with comparatively less surface area.  In any case, it will be another two weeks before the hams are rinsed of their salt and hung to dry.  It will be interesting to see how the ham compares with the pancetta after the salt cure has finished.

As the moisture pulls from the prosciutto, water puddles around the ham and drains through a couple of small holes in the bottom of the plastic bowl.  And so, the salt around the ham stays relatively dry.  The molasses ham, on the other hand, is sitting in a pool of syrupy brine as seen below. 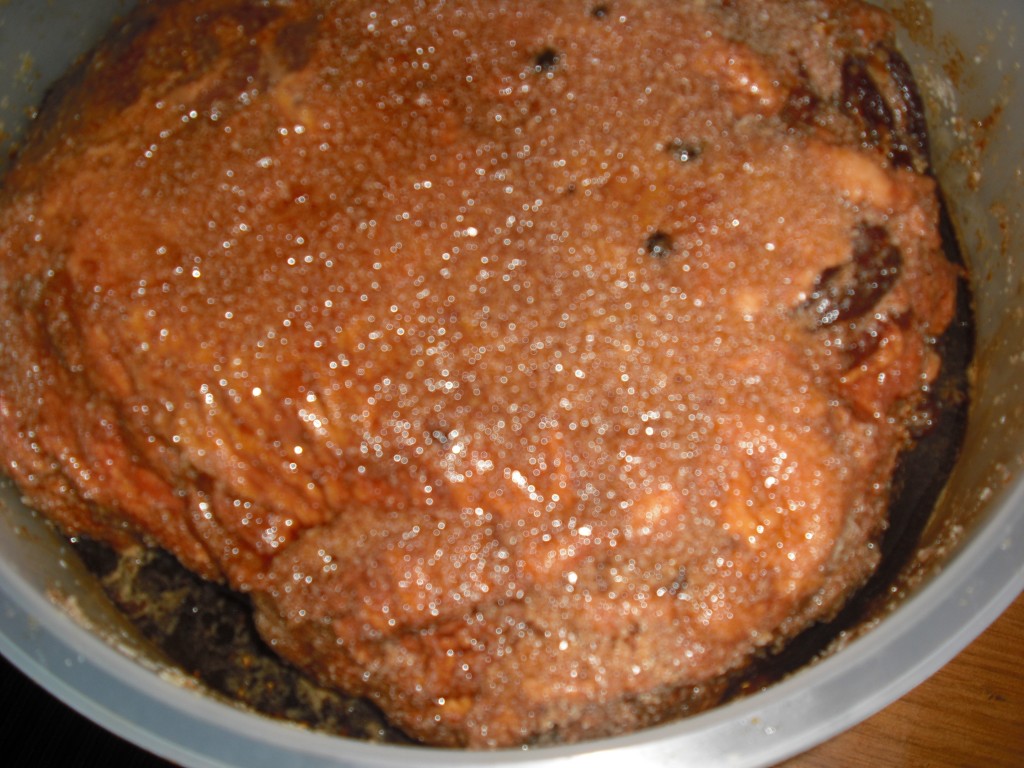 The molasses salt mixture initially formed a thick rub that spread evenly over the ham.  After only a couple of days, the mixture had softened and changed to a dark, thick liquid.  I tested the water activity at a one inch depth, in the same way I had tested the prosciutto.  To my surprise, the water activity was at 0.987.  Why so little change?  And at three inches, it tested  0.988aw.   I then realized that the section of ham I was testing was covered in a thick layer of fat.  Perhaps the fat was forming a barrier between the ham and the salt solution, keeping the moisture from migrating.   I tested again at a one inch depth but in a different location and found the water activity to be 0.946, much closer to the results of the prosciutto.