After two weeks of salt curing, the moisture in the two hams is migrating, but at a snails pace. The water activity of the prosciutto is now down to 0.922aw at a 1 inch depth and 0.975aw midway through the ham. A change from last week of just 0.018aw and 0.015aw respectively.

As moisture moved out of the molasses ham, however, the syrupy liquid (depicted in last weeks post) thinned, allowing the liquid to drain. With the liquid removed, I was able to redistribute the salt rub, and the ham now looks similar (though perhaps lighter in color) to when the salt mixture was initially added. 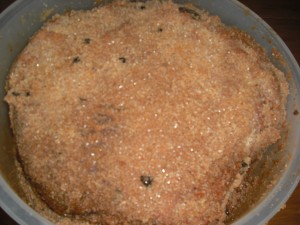 At first I was concerned that the sample size provided by the biopsy needle would be too small for accurate testing. 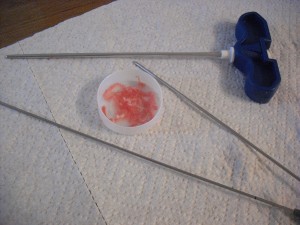 The fears were dispelled when, prior to starting the project, I compared results of a sample acquired by use of the needle to the results of a slice of ham and found them to be essentially the same.  Still, it’s comforting to see a relatively steady decline in water activity for both hams.