Hams – Does Science Ever Lie?

The prosciutto and molasses ham have been air drying for a couple of weeks, so I thought I’d review the water activity results by plotting them on a graph.  Shock, dismay, or maybe bewilderment is the right adjective to describe my initial reaction.  Let’s take a quick look at the water activity data.

The chart below indicates the change in water activity of the prosciutto over time at a one inch depth (blue line) and at the center of the ham (red line).

No real surprises here.  The lines are relatively straight and sloping downward.  The salt cure was removed from the prosciutto on June 15th.  Note that while the ham was curing in salt, the difference between the water activity at the two depths seemed to get larger, but over the last two weeks of air drying the two lines are coming closer together.   I’m curious to see if this trend continues.

Now let’s take a look at the Molasses Ham… 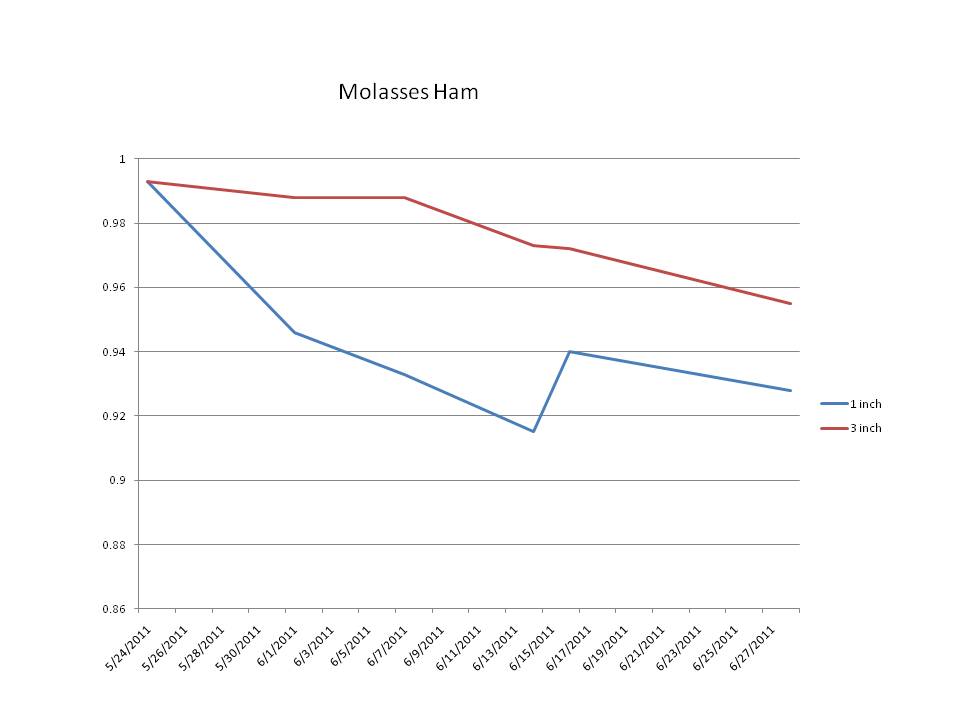 OK, so there is something wrong with this picture.  What’s going on with that blue line.  How could the water activity have jumped up by 0.025aw in just two days?  Hmmm, let’s review the process.   On June 14th the molasses salt cure was removed from the ham and water activity tests were taken.  At the one inch depth the water activity was less than 0.92 – then the ham was cold smoked for 18 hours.  That was 18 hours with scattered rain showers so humidity was pretty high, but there’s no way it was high enough to raise the water activity in the ham.  Was this a result of natural variation within the ham?  Was there a sampling error?  The change in water activity was very consistent for two weeks from June 1st to June 14th, then it dramatically jumped up to 0.94.  Now (on the 28th) the water activity at a one inch depth is about the same as what it was three weeks ago – on June 7th.  Something else must be going on here.

The answer finally came to me only after another mental review of the process.  As was instructed in the recipe, the ham was rinsed of the molasses/salt rub, then soaked in cold water for 6 hours to help remove any excess salt (a step not included in the instructions for the prosciutto).  I took water activity readings on June 14th after cleaning away the salt but before soaking it, so the ham must have absorbed water while it soaked.  Then it went back in the fridge overnight before being smoked and then tested again on the 16th.

Ah. so does science ever lie?  I don’t know, but in this case it wasn’t the data that was wrong but rather the interpretation of it.