Last week as I watched some old episodes of “Top Gear”, a segment on the ill-fated Volkswagen Phaeton caught my eye.  The car, introduced in 2002, was meant as the crowning achievement of VW’s then chairman, Ferdinand Piech.  Simply put, it was supposed to be the “finest car ever built”.  So, VW built it.  Problem is, nobody wanted the finest car ever built to have a VW logo on it, and sales were a disappointment.  Moral of the story: just because you can doesn’t mean you should.

There are lots of reasons to try and make cured meats yourself.  I can think of 4:

1. Education – you want to know how the food works, where it comes from, and how it’s made.

2. Saving Money – sometimes it’s just cheaper to make something your self than buy it at the store.

3. Scarcity – living in a little town in rural Washington state, the probability of finding good charcuterie for sale here is essentially nil.

4. Taste – this is probably the most important reason of all, but is also subjective.

What the home cook needs is some way of knowing if they should make andouille sausage from scratch, rather than whether it’s possible.  Breathy endorsements from professional chefs ring hollow – having been around food all their lives, they discern tiny differences in food that are probably lost on someone like me.  With this in mind, I’d like to propose a number that I’ll call the “DIY Food Quotient”.  Ideally, it can tell us if we should spend our time cranking out homemade pancetta, or instead stream more episodes of “Top Gear” on Netflix.  Here are the components of the proposed score:

2. How difficult it is to make the product, on a scale of 1 to 10.  Mostly, this is time, although it could be other things, too.

3.  Cost differential – how store-bought compares to locally-sourced.  I need to think about this one.  I think the DIY product should get a score boost from having the same cost a store-bought one.  I think it deserves a “10” for having a lower cost, so we’ll see how this pans out.

4. Usefulness in cooking – pancetta is a versatile and oft-used ingredient.  Tasso, used mostly for Gumbo, is not.  I think they deserve to be scored separately.

These ratings are complicated by the fact that some recipes (like the salami we’re making) are being compared based on whether their main ingredient was store-bought.  Other products (like hot dogs) will be compared by buying the entire article at the store, making something from scratch, and comparing.  In the end, though, we’ll make that clear.

In case you’re wondering how the sausage is coming along, here’s a picture: 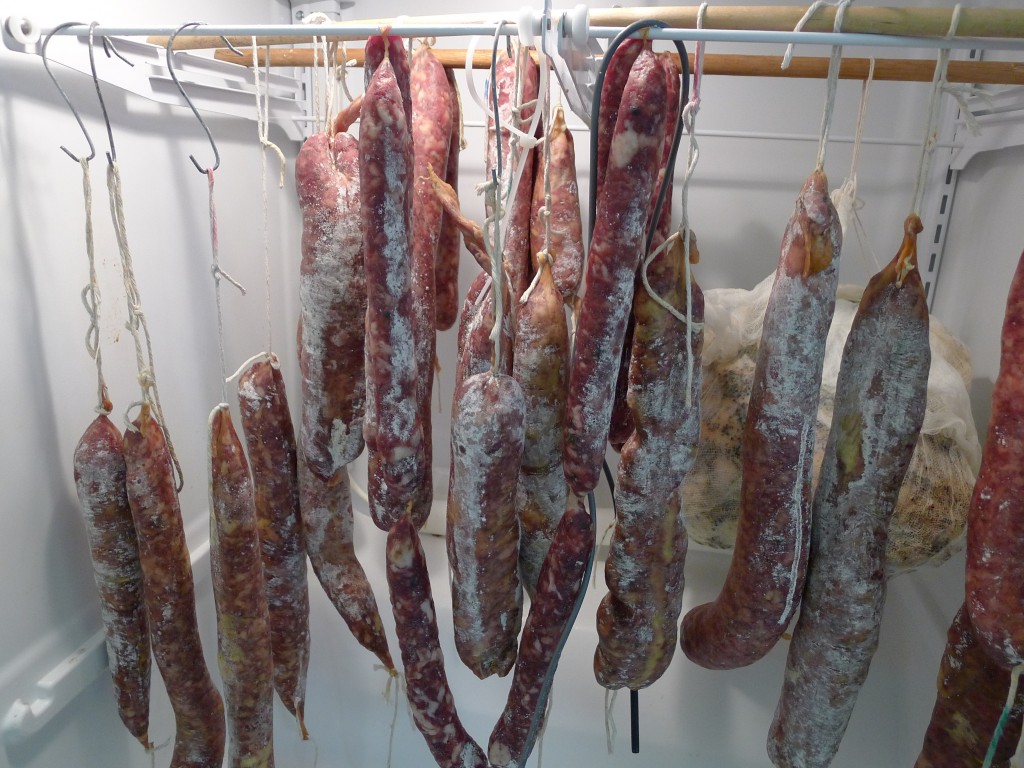 Yes, the white mold has grown a lot, but there are spots of green, which is disconcerting.  To be on the safe side, I’ve taken the humidity down, and will start drying the sausages in earnest now.  Because we know what the target water activity is for these sausages, I’m not going to sample water activity as often as we’ve done before.