Inside vs. Outside Sausage Water Activity

It’s clear from many water activity readings we’ve taken how much the inside differs from the outside of the sausage in terms of moisture.  This post, in particular, showed that differences can be quite large.  One thing we hadn’t done before: slicing the fermenting sausage, and testing concentric circles of sample to see how each “ring” was different.  The sample I chose for this test was the saucisson sec made with local pork.  Remember, this had a water activity of 0.885 when I measured it yesterday.  After taking a thick slice off the sausage, I carved out two circular sections – a core piece, and one other ring.  Here’s what I found: 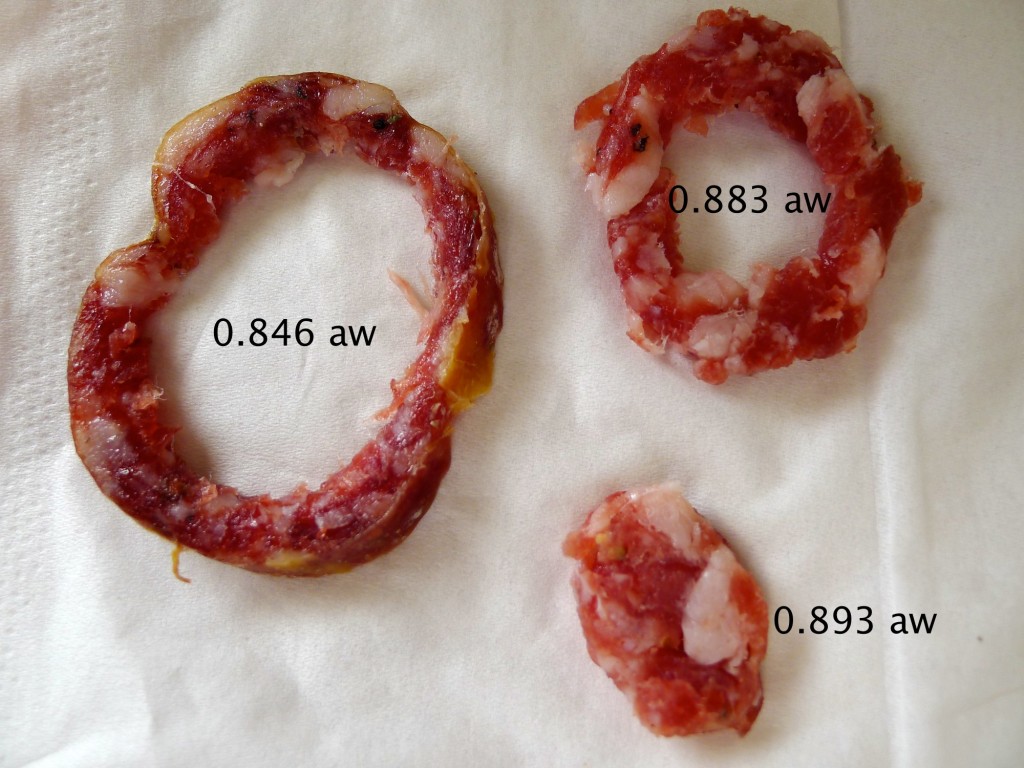 The sausage itself has a radius of perhaps 2cm.  The first 5-7mm is the only layer that is significantly different.  The 2nd ring and center core are both about 0.89 water activity units, so the biggest gradient is between the 2nd and 3rd ring.  Note that the overall water activity of the slice (0.885) is dictated more by the “wet” portion of the sausage than the drier outside.  Also, note that the thickness of the outside ring (5-7 mm) is almost the same as the radius of the “store bought genoa salami”.  In spite of that fact, the water activity difference is huge – 0.846 vs. 0.785 for the smaller salami.  The reason seems clear: water from the center of the large saucisson sec is still migrating out through the outer ring of that sausage.  With a total radius of just 6mm, the genoa salami has a much smaller “core”, and so not as much water is trying to escape through the outer layer.