Lomo, Coppa, and Saucisson of Tenderloin?

Over the last week I’ve started three new projects–Lomo Embuchado, a Spanish dry cured pork loin–Coppa, cured chunks of pork (not ground) stuffed into a casing and dried–and “Saucisson” of pork tenderloin, a dry cured tenderloin that looks a lot like a sausage.

“Saucisson” of Pork Tenderloin:  After realizing how quickly time had flown since our last meat curing project, we started pulling pork from the freezer to thaw for our up coming experiments.  Along with the pork shoulder and loin, a couple pork tenderloins were placed in the fridge to thaw.  But, do people dry cure tenderloin?  I found a recipe online, so apparently we do.

The recipe came from thepauperedchef.com and is titled “Saucisson” of Pork Tenderloin, “A baby step towards making salami.”  Saucisson is french for large cured sausage and obviously this whole, dry cured tenderloin isn’t a sausage.  So, the term saucisson really doesn’t fit except that the tenderloin is the size and shape of a cured sausage.  It looks like sausage even if it isn’t.  Here’s a pic of tenderloin wrapped in cheesecloth (there is no casing) and hanging to dry. 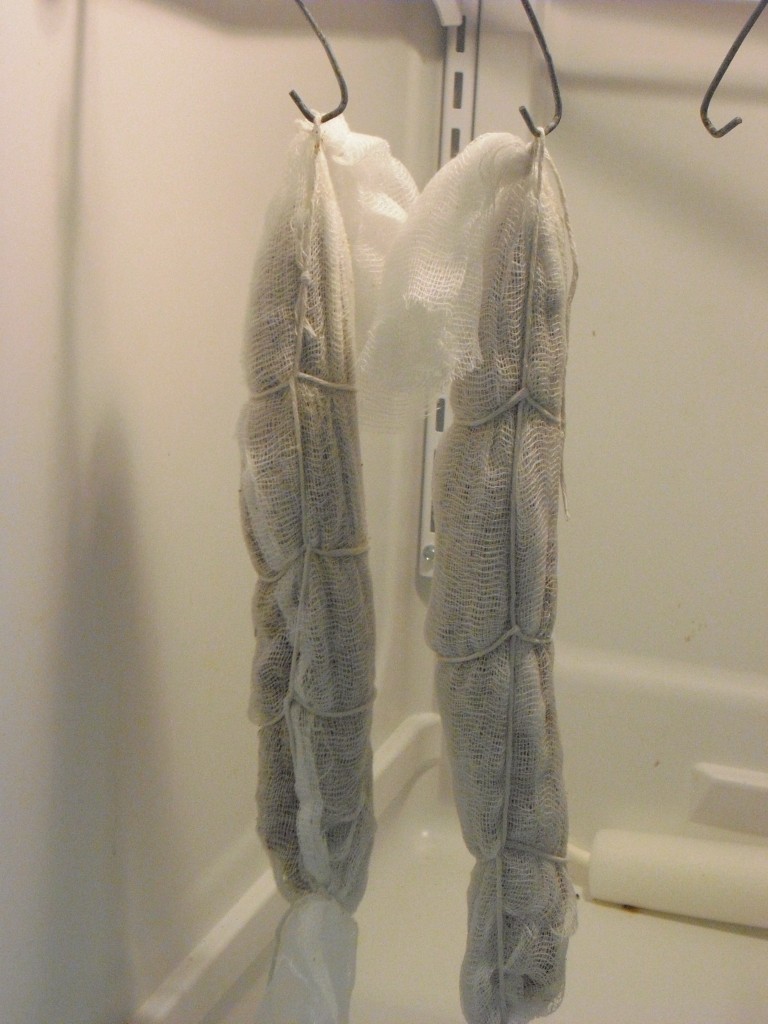 I’m curious to see how close it comes to my favorite so far, the lonzino dry cured pork loin.

Coppa:  Another cured meat similar to a sausage but isn’t is called coppa.  Like salami, it’s made of pork shoulder and is stuffed into a casing–we’ll be using beef middles.  But in the case of coppa, the shoulder isn’t ground.  The recipe calls for trimming the fat and sinews from the pork, then cutting it into three inch squares.  After triming, the meat was too small for three inch squares, so my chunks are smaller than that.  I realized in the midst of cutting that the authors of the recipe probably meant just to remove the fat from the exterior and leave the thick sections of fat inside the shoulder roast, so we’ll see how mine turns out.  Here’s a pic of the cut up pork. 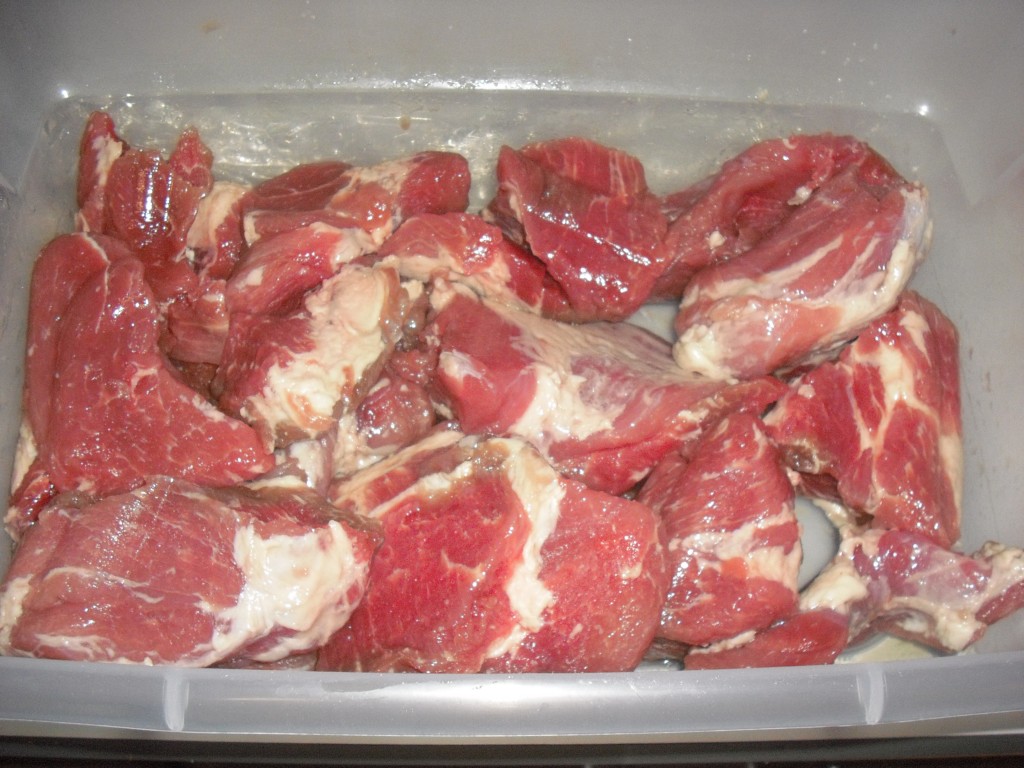 You can see there’s still plenty of fat.

Lomo Embuchado: Lomo, a Spanish cured pork loin, is much like lonzino with the added zest of Spanish paprika.  In our little town I wasn’t able to find Spanish paprika so I used a paprika from the Mexican food isle of the local grocery store.  I suspect it will be similar in flavor and I’m anxious to try it.  I might actually like it even better than the lonzino.   The loin rubbed with salt and paprika is shown in the pic below. 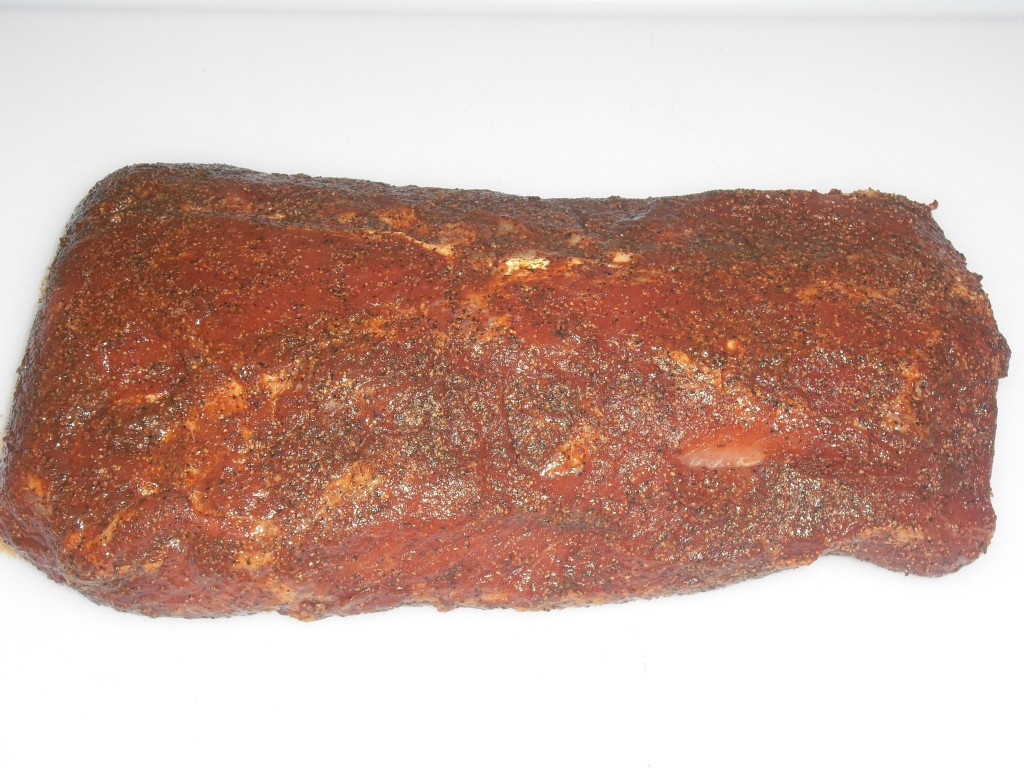 Looking at that rubbed meat tempts me to roast it now and have it for dinner.  Instead I’ll let it cure in the salt for a couple of weeks, then hang it to dry for a couple of months before it’ll be ready.