Bacon, pork belly that has been salt cured before cooking, is an American tradition and thus mustn’t be overlooked in our cured meat testing.

To start, I trimmed the pork belly (which came from a local pig we had butchered) and coated it with a salt rub.  Different seasonings can be used, but I chose the sweet option with salt, nitrites, and brown sugar.  The salt rubbed pork belly was refrigerated for 9 days, then rinsed of the rub and smoked to 170 degrees F.   (The recipe called for smoking to 150, but I left it in the smoker a little too long.  Fortunately the over cooking didn’t seem to effect the quality of the bacon.)

The picture above shows the bacon, fresh out of the smoker.  The smoky aroma was intense, and the meat melted in you mouth – the fatty portions of the bacon were almost buttery and smoky but laced with rich flavors of the meat.  This would make an incredible roast.

I was expecting more of the salt to come through, but the meat was surprisingly lacking in salt flavor – it was delicious but not what I expected for bacon.  I removed the blackened outer layer from the bacon and left it in the fridge for a couple of days before slicing it.

The pictures to the right depict the sliced bacon before and after baking it in the small toaster oven we have hear at work. 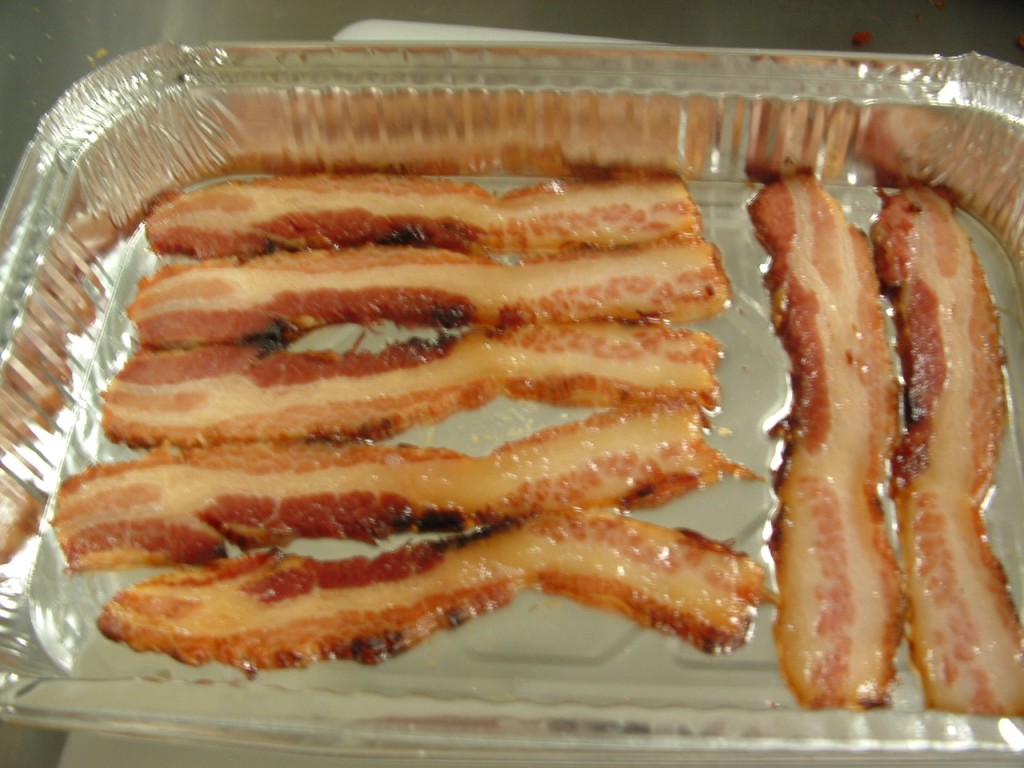 Then it was time for the taste test.  In an attempt to compare the homemade bacon with bacon from the store that I thought might be similar, I purchased two products.  Wanting to get another whole meat – non sliced bacon that would look similar to the home made, I picked up a salt pork – Hormel brand – in a solid block.  Then I sliced and baked it in a similar manor to our bacon.  I also purchased a standard thick cut smoked bacon from the local grocery store.  It’s slices were similar in thickness to ours and actually looked more like our bacon than the salt pork did.

Below is a picture of the three types of bacon on the plates during taste testing.  The water activities of each, taken before cooking them (but after smoking) were as follows… 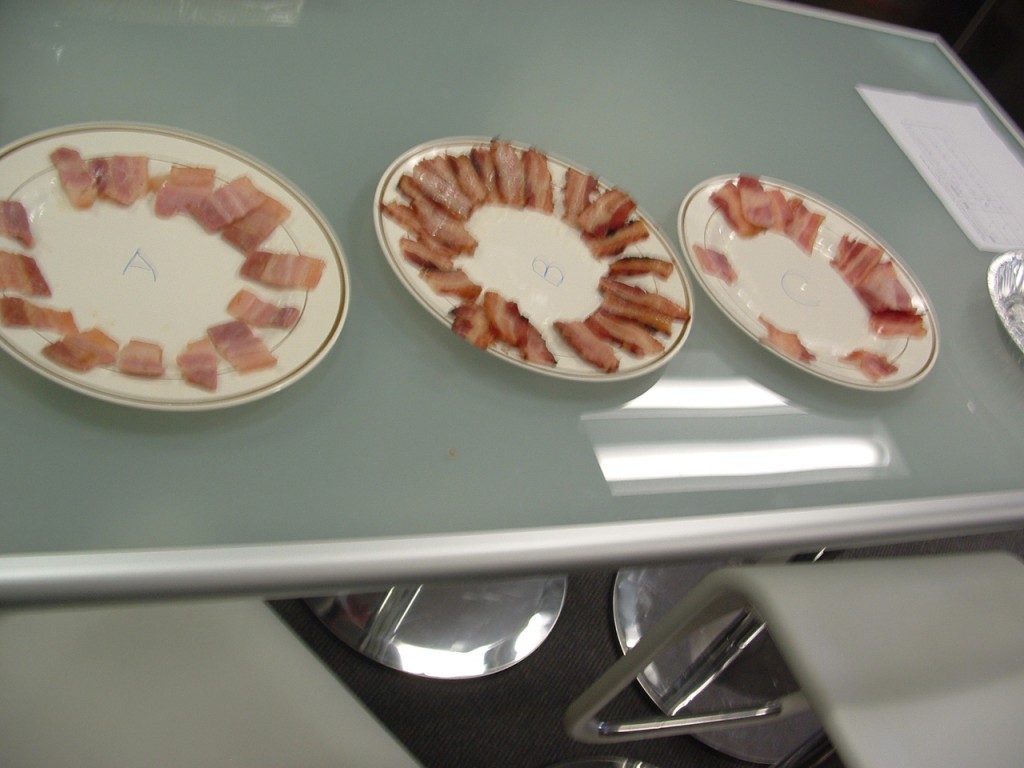 The plate marked “A” in the picture holds the salt pork, “B” is the home made bacon, and “C” is the store bought smoked bacon.  The three types of  bacon were tasted by 23 of my fellow employees and ranked on a scale of 1 to 10 based on how well they liked it over all.  1 meaning they hated it, and 10 meaning they loved it. 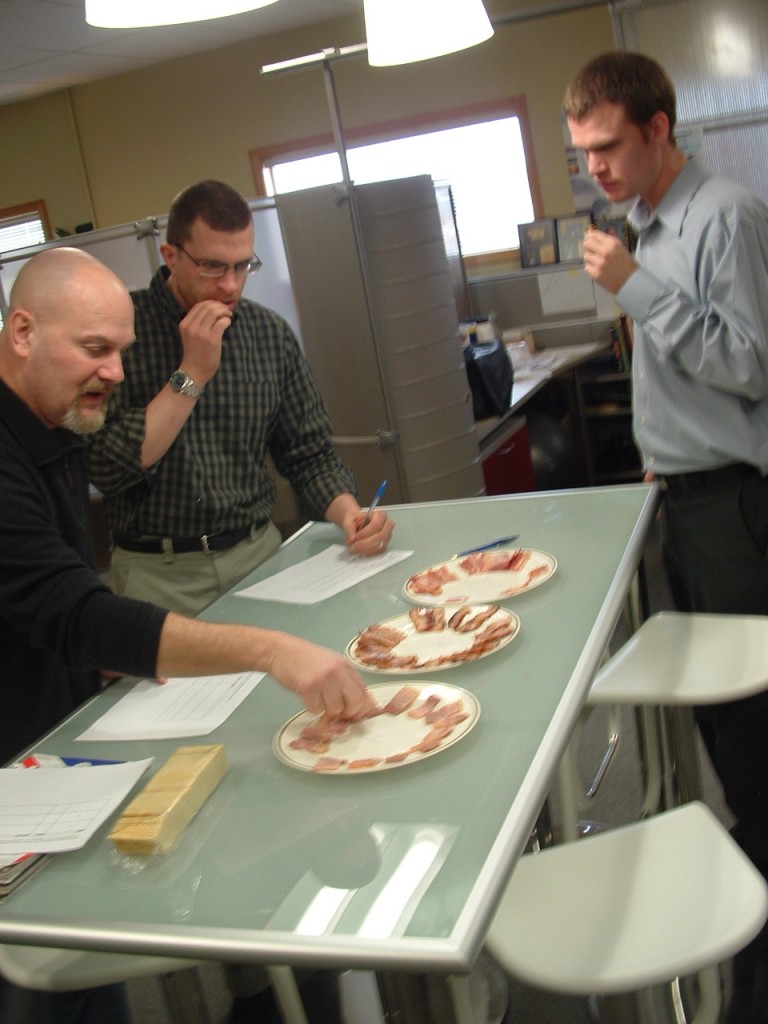 The results of the testing were rather telling, I thought, and were very polarized.   Out of 23 tasters, 11 chose the salt pork as their favorite.  Their comments indicated a great like  for the saltiness.  12 chose the homemade smoked bacon as there favorite.  Comments included good flavor, smokey, melts in your mouth, and soft.  Only 3 tasters chose the store bought smoked bacon as their favorite.  Note that in some cases the tasters had tied high scores, resulting in 26  favorites even though there were only 23 tasters.  Over all, the home made bacon was most favored, but barely.

When looking at average scores, a very different picture is painted.  They are as follows…

For some, it appears,  salt is the expected flavor in bacon.  Others like the flavors of the meat not to be compromised or hidden by the salt.  My personal, and biased, preference was for the homemade bacon.  I would agree, though, that it could have used more salt.  The only thing I would change the next time around is adding more salt rub to the pork belly during the salting stage, but not too much.  A little more salt would have likely pulled the water activity down to about the same as the store bought bacon.  I loved the tender texture of the homemade bacon and the rich flavors of the meat infused with hickory smoke.