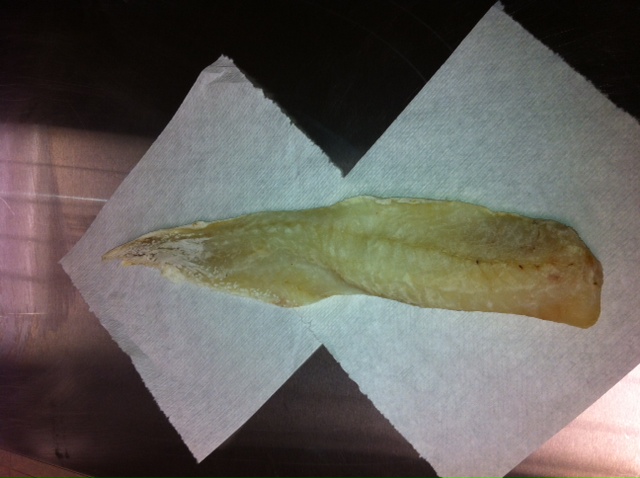 Now that the fish has been in the fridge for 5 days, after reposing in salt for the first 24 hours, it seems pretty dried out.  The tips of the cod have a very beef jerky-like texture.  The thicker parts of the fish still have some softness, but a paper towel pressed onto the surface yield only 2 small blotches of moisture. Also, in the picture, you can see some of the salt from the fish deposited on the surface as it dries out.

As far as water activity, the tip reads 0.704, which is down in jerky territory, and a good indicator that the cod would be shelf stable.  The thicker parts of the fish would probably still be in the 0.75 range, but in losing water, the fish has also reduced its water activity.  The salt is still a better agent at reducing water activity than drying, though.  Over the next day, I’m going to rehydrate the cod and use it in a recipe.  This has me thinking of lutefisk, which starts out as food, is turned into poison, and then back into food.  No lye has been used in the manufacture of this fish – we’ll see how it turns out.