I’ll stray from the usual water activity focused analysis again to detail usage of the product we made: salt cod.  I must say, this was really simple to make, but didn’t look much like fine dining when we were done.  The fish itself wasn’t totally stiff at the end of 7 days of curing/drying, but it looked pretty durable.  With a water activity in the low 0.700’s, it probably wasn’t going to mold, either.  I can imagine, though, that ocean-going vessels of the 1500’s probably dried theirs to a wooden plank consistency before socking it away below deck.

Although Charcuterie doesn’t usually serve up a finished dish, the book does drop bread crumbs in the description about how to use the stuff once it’s made.  In this case, they suggested cookbooks from Zuni Cafe and Bouchon as good places to start.  Seeing that Bouchon was on offer from Amazon for less than $30, and never having had the guts to buy a Thomas Keller cookbook before, I pulled the trigger.  A quick aside on Keller: the reason I find him intimidating is that every time I see him on TV or something, he’s talking about how simple and easy food should be.  And yet, he runs the best restaurant in the entire country.  This suggests he possesses superpowers that make his simple food magically turn out like food for the gods.  Also, his recipe for beef stew in The French Laundry Cookbook takes 4 days and 20 pots to make. 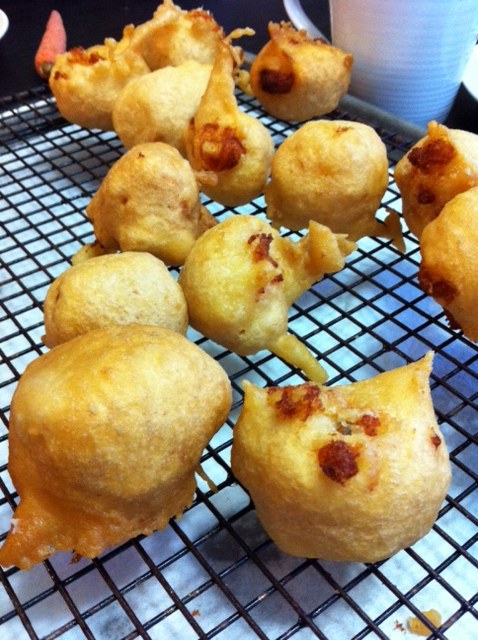 There were just 2 cod recipes in Bouchon so I chose the deep fat fried one for using the salt cod.  It’s called Cod Brandade, and is made by mixing the poached cod with some mashed russet potatoes and olive oil.  This mixture is rolled into 2Tbsp balls, coated with batter, and fried.  The resulting snack is both delicious and a little dramatic, with batter streaks clinging to the ball like a comet’s tail.  Served, as suggested, on tomato confit, the dish really satisfies.  The cod flavor came through clearly.  When prepping the salt cod, remember to start soaking it a day ahead.  12 hours wasn’t enough, in my case, even though I chose thin pieces.  Bouchon says 12 to 24 hours, but at 12 hours the cod was still on the verge of being too salty for the recipe.  Anyway, here’s a picture of how it turned out, but believe me, it was a winner.