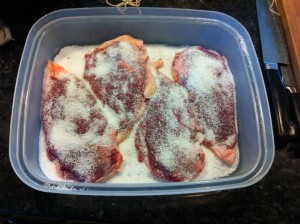 The duck prosciutto recipe from Charcuterie sounded relatively easy, and it was.  By far, the most difficult aspect was actually getting the duck breast, which in my case came attached to a whole frozen duck.  In the book, Ruhlman suggests either buying the duck online (so as to get only the part you want) or getting whole ducks and breaking them down.  I did the latter, though they have to be special ordered in a place like Pullman.  Nobody I could find stocks them, although this changes with season (I do see duck showing up around the holidays).

I bought 4 birds, and breaking them down proved challenging.  I’m kind of familiar with chicken anatomy, but the duck was a little different.  Knowing I wanted at the breast, I tried to remove what on a chicken would be the wishbone (this makes slicing off the breast a lot easier).  I did manage to get the “wishbones” out, but it took some doing, and I’m not even sure they’re wishbones.  The other issue is that chicken breast tends to be massive and thick, while duck is much flatter and longer.  This raised the stakes when trying to coax it off the bone, and slip ups caused holes in the duck breast rather easily.

Eventually, all 8 came off the bones.  For comparison purposes, a friend from work donated some wild mallard breast he acquired while hunting last year.  We’re going to cure them in the same way, and see which we like better.  After salting the two kinds of duck breast, we put everything in the fridge until the next day.

We observed the following day that the meat had indeed taken on a “cured” look from all the salt that was in it.  Both wild and store meat were harder to the touch.  I brought both batches in to work today to cure in our fridge.  After stringing them up, we now have about 7 days to wait before we try it.

I tested the water activity of both meats post-salting, and they were exactly the same – 0.843 aw and 0.839 aw respectively.  It’s important to note that leaving our meat to cure too long would result in an over-salted product.  We don’t know what over-salted is for this product, but since saturated salt is 0.755 water activity units, the 24 hour cure didn’t get us all the way down to that level.  With the precision of water activity in that range, establishing “salty enough” and “too salty” values could help producers know when to pull meats out of a salt cure.