So the water activity blog has again been neglected for a certain amount of time.  Ditto for the d 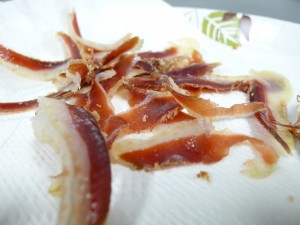 uck prosciutto.  It has been in the fridge curing for over a month now.  This means the duck is likely over-dried.  I have to admit that 5 or so days into the drying process, I sneaked a sample to see how it was going.  It didn’t taste good.  I was a bit discouraged after going to the trouble of breaking down 4 ducks to get the breast meat, salting it, and hanging the duck to dry.

After prompting from a kind reader, I went back today and sliced up some of the duck.  It actually looked really good (see pic to the right).  The taste had improved quite a bit, and I was no longer as disappointed with the project.  Still, it is clear that it’s not as tasty as other things we’ve made, and it’s not something I’d make again.  Maybe I need to eat it with the right food to contrast or compliment the flavor.  It definitely tastes like duck, and the fat in the skin gives everything a rich feel that is nice.

The water activity reading of the finished product was 0.713, much lower than many dried products we’ve made before.  This is likely due to the fact that we left it in the fridge for a whole month, and that the breast slices were relatively flat (much flatter than a store-bought chicken breast, for example).  Since I was only supposed to dry the duck for a week, I think it turned out a little salty, but not enough to cause a problem.

Interesting, though, that no mold grew on the duck during the curing process.  Not sure why that is, since much of the first week the duck dried in the fridge was spent in a range above 0.8 aw. That level would support mold growth.

Alas, the wild duck proved an abject failure.  I treated it the same as the store-bought duck, and it turned out quite badly, looking like an old piece of drift wood.  I tasted it, and it wasn’t terrible, but it wasn’t good either.  This duck was likely doomed by its paltry fat content, and its surface turned a white color, resembling frayed rope.  All in all, it was interesting to try another product from the book, but this wasn’t an extremely tasty result. 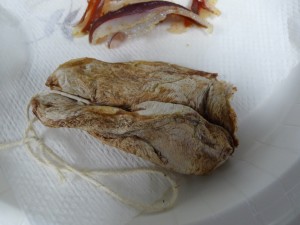