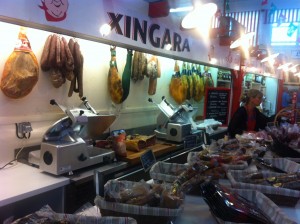 The market stand where we bought the ham

While in France visiting customers with our Europe General Manager Laurent Jubault, we had the chance to travel to Biarritz, a remote corner of France set on the southern pacific coast in Basque country.  We arrived by plane a little early for an afternoon appointment we had, and took advantage of the time to wander around the downtown area of Biarritz.  As seems usual for towns of some size in France, they had a vibrant market with fruits, vegetables, meats, cheeses, bread, fresh pasta, etc. As we were only a few miles from Spain, French, Spanish, and Basque influences on charcuterie were all evident.  In the end, we found some pre-packaged meats from Spain to sample, and brought them back to the office to test.

First off, although we were in Basque country, the only connection between the meat we bought and Pays Basque is that a Basque chef promotes the kind of meat we bought (his name is Martin Berasategui).  The product we bought is all from an area in Spain called Jabugo, renowned for its hams.  Yes, these hams were made from those lucky pigs that wander around the countryside gorging themselves on acorns (and only acorns) from oak trees.

We bought three kinds of products – a straight-up ham, a cured tenderloin (lomo-like), and a cured chorizo, seeing as how were were so close to Spain.  The ham was by far the most expensive of these – it cost €12.50 for 80 grams, or (wait for it) $85/lb.  Still, it cost us a little less than this Jamon Iberico from Amazon at $96/lb, and that’s just for a grain-fed product, not acorn-fed.

The simple fact is that the ham (Iberico de Bellota) was delicious, and the tastiest of the three products we bought.  As I’ve said before, describing the taste will come off as a inadequate, but the nutty flavor came through clearly, and lingered with the fat.  It had a little bit of a rough texture as compared to some prosciutto I’ve had before.  The flavor seemed somehow fittingly complex for a product that has been curing for 3 years.  The lomo was still tasty, but sharper and not as deep as the ham.  The chorizo has no heat at all, but still had a nice paprika flavor to it.

Water activity readings on the products produced higher results than I would have suspected for both the Lomo and Chorizo.  Each of them was near the level that would support microbial growth.  Our homemade Chroizo and Lomo was cured longer, and had a lower water activity.  I would have expected the Jamon Iberico de Bellota to have a water activity above 0.8, and it did.  We’ve never tested a 3 year cured product before, and it’s clear it has lost more moisture than our prosciutto that we cured for one year, but this process happens very slowly.  Anyway, here are the readings: 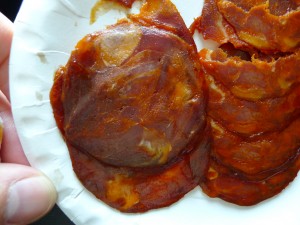 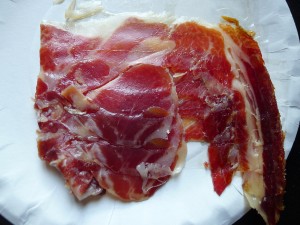 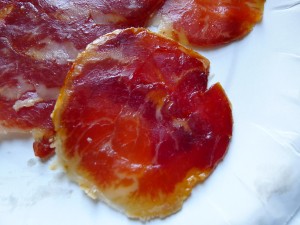