A couple of months ago my brother Eric asked if I knew how to make beef jerky, and fortunately I had recently watched an episode of Good Eats on the Food Network where Alton Brown covered that very topic. Alton’s method for drying jerky used a standard home box fan and a forced air furnace filter rather than a heated food drier. The combination of Eric’s question and Alton’s show took me back to a place and time in my life where home grown was the norm.

To explain a little about my upbringing, I was raised in the country near Corvallis, Oregon, in the foothills of the coastal range. Our home set in fields of native grasses surrounded by the beauty of the state forest. We grew our own produce, milk, eggs, and meat.

My parents were ahead of their time when it came to recycling as all of our old junk was put to alternative uses. The convertible 1960s Ford Fairlane was used as a support for wild blackberry vines. The old pump house became a home for pigs and chickens. And, a no longer used wood box sat next to our long gravel driveway as a decoration. As children we debated the original intent of that old box whose interior included slats of window screening layered above an electric fan. Mom said it was an old pie case, but some where along the line I got the idea it was a food drier.

I described the wooden device to Eric, who’s a few years younger than me and so didn’t remember, and this is what he built.

Notice the standard box fan at the bottom, the slats of screening through the box, and the air filter at the top to let the air escape.

I bought a thin sliced beef roast, cut it into strips, and marinaded it in a zesty teriyaki type sauce with lots of salty soy sauce and sugar.  After 24 hours, I placed the strips of meat on the screening and turned on the box fan. 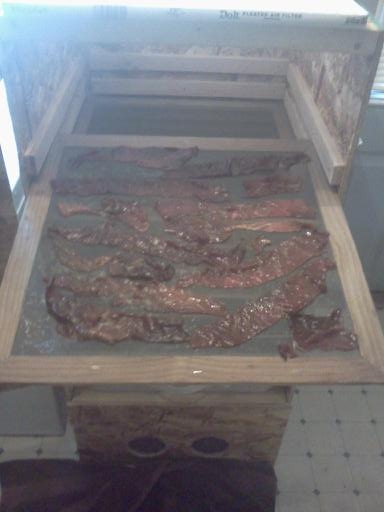 14 hours later, the jerky felt soft, moist, and pliable, but had the appearance of finished jerky.  The water activity tested at 0.72aw.   Most jerky falls between 0.75aw and 0.80aw, so this was clearly safe to eat and store.  It seems moist for jerky, and I suspect the salty sweet marinade brought the water activity down, so the jerky was done sooner and moister than without the marinade.  A job well done – a working, non heated food drier and a delicious product.  Much better than the jerky we made as children by placing strips of beef in a 200 degree oven with the door open.