Can I eat Grandma’s food storage?

One of our former employees, Tyler Zollinger, graduated last December and left us at METER with a few gems from his grandma’s basement. Food storage items that were 20-25 years old (or older) were left with us, including a can of Mountain House brand freeze-dried noodles and stroganoff sauce with beef. Mountain House has been around for 44 years now and makes tons of freeze-dried entrees, breakfasts, desserts, and other items for use when camping, backpacking, and even food storage and emergency preparedness. I’ve had entrees like Lasagna with Beef Sauce and Chicken Teriyaki with Rice while backpacking and it’s actually pretty tasty. Of course those were fairly new packets of food I’d tried. We were dealing with a whole other animal from Grandma Zollinger’s basement.

The Mountain House website claims that their #10 cans of freeze-dried entrees and other foods have a 25 year shelf life because of tests under real world conditions. If an employee of Mountain House will personally test a 35-year old food product and claim that “it still tastes great!”, then trying some of Grandma Zollinger’s old stuff would be fine and safe, right?

Well, it’s not so much a matter that the food is safe, but more a matter that it tastes good. Granted if the product is less aged then it will taste better (unless you like decades-old bottles of wine or really sharp cheese). We wanted to try this out by breaking into this can and taste testing the contents. There’s no date on the can but Scott guessed it’s about 25 years old based on the dates of the other products we have. 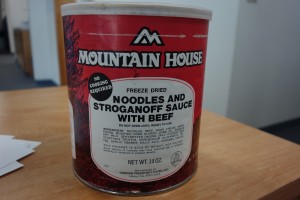 We decided to do a taste test comparison by purchasing a brand new packet of freeze-dried Beef Strogranoff with Noodles. Slightly different name, but we assumed they were approximately the same product. 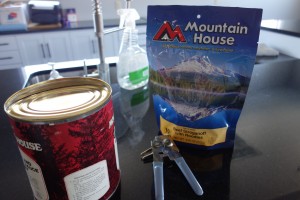 Then it was time to open up that old can for the first time in 25 (but maybe more) years. The freeze-dried pieces looked like tiny little rock chips, smelled “old” and stale…and a bit like gardening soil? Or possibly marine life? I also took a picture of what the new stuff looked like (sorry it’s not the best picture of the new stuff, but you get a good idea of what the old pieces looked like). The contents of the new bag smelled a little better and had more of a powdery, soft feel as opposed to the little rock chips in the can. 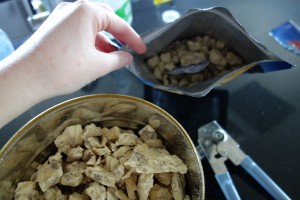 Then it was time to test the water activity of the two samples, the old product dubbed product A and the new product dubbed product B. The results of our tests were somewhat surprising. Product B came in at 0.2168 aw, but Product A came in at the very low aw of 0.0442 aw! Absolutely bone dry! I was able to crumble Product B more than Product A into the sample cup, but I’m not sure it made too much of a difference. Product A was pretty rock hard as it was. 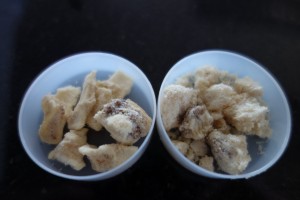 Old product (A) on left, new product (B) on right

Then it was time to round up some brave employees for a taste test. I had the chance to use METER’s brand new kitchen to boil some water and hold the experiment…er, taste test. I passed out a paper to each of the 12 participants with instructions to taste each product placed in bowls A and B. They were then to write their thoughts about the product in regards to flavor and texture as well as give the product a rating on a scale from 1 to 10. I also had them indicate which product they tried first. 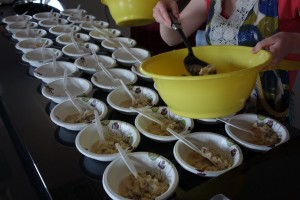 Dishing out Product A

Then the tasting began! 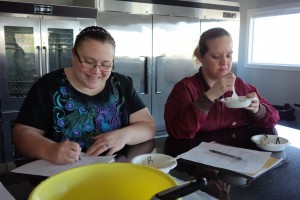 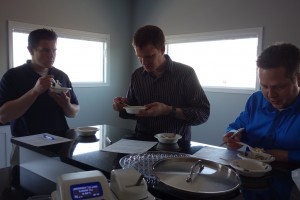 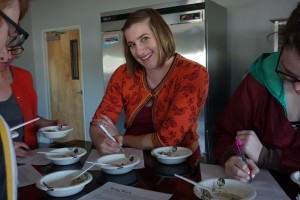 As results and feedback came through, it was very obvious which product was new and which was old. Most people (at least seven out of the twelve) tried Product A first. Six people used the word “bland” to describe Product A, with two people each saying it was “not flavorful” and “tasted like dried food”. As for texture, six people said that Product A’s noodles were mushy or squishy, with other comments like “noodles don’t hold up” and “texture of jello.” The mean score given to Product A was a 5, with the lowest score being a 2 and the highest being an 8.

This was Product A after it cooked. It really didn’t look appetizing…looked more like pig slop than stroganoff… 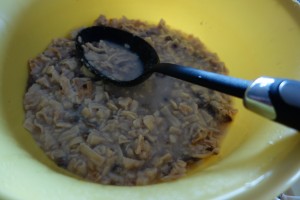 When describing the flavor of Product B, however, seven people said that Product B was “more flavorful than A” or had “better flavor.” Some said “tasty” and “pleasing” and “more salt content than Product A”. As for texture, Product A was described as “not mushy/squishy” and “creamier.” The mean score for Product B was not surprisingly an 8, with the low score being a 5 and two people even giving it a high score of 10. After everyone had left, I even had some leftover Product B as my afternoon snack because it was that good. From the results I gathered, it was obvious that Product B was much better than Product A.

Product B after it cooked…much better looking. And much more tasty. 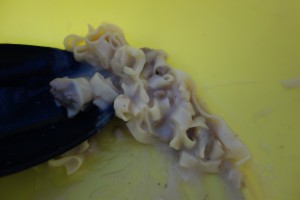 As a side note, I may have put a little too much water into both products. However, I found that Product B soaked up the water much better than Product A. Product A had a harder time soaking up the water and was thus left in a pretty sorry, soggy state. Despite this it was still quite obvious that the flavor and texture of B was better than A. 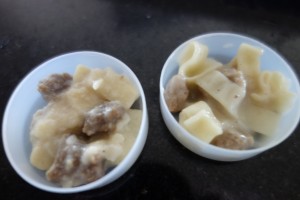 Product A (left) and Product B (right) samples

We did the taste test yesterday, but while doing some research on the Mountain House website for this post  I figured out how to decipher the stamped date code on the old can. The can was stamped E210, which indicates two things. All products from 1970-1988 were given a letter from A (1970) to U (1988). E was the year given for 1974, and 210 is the Julian date when this product was packaged. So…this product was packaged on July 29th, 1974. This product is 39 years old! No wonder it tasted so bland and looked so gross. My poor fellow employees…so brave… I think they all deserve candy now. Or some other prize of unspeakable value.

While Product A, aka the 39-year-old freeze-dried product, was not the most pleasant thing to eat, it won’t get you sick. The stuff is still quite edible even though it’s not particularly tasty. So the moral of this whole book of a blog post: if it’s the zombie apocalypse and you’re stuck in Grandma Zollinger’s house with only 39-year-old cans of freeze-dried entrees to eat, you’re going to be okay.