Water activity is great.  This proclamation shouldn’t be surprising, given I work for a water activity meter company.  Still, it does have a little ‘splainin’ to do.  While water activity is very precise, sampling technique can influence readings.  What’s more, charcuterie that has been sampled properly is likely to end up with holes in it – not an attractive quality to many consumers.  This underscores the fact that you must cut away part of the product and put it into a sample cup in order to test its water activity. 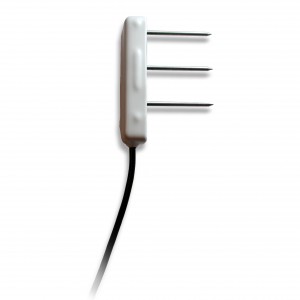 The ideal method would be one that can detect small changes in the water of the meat, but is “in-situ”, a fancy word for measuring something in place instead of taking a sample back to the lab.  So I had an idea.  Why not use soil moisture sensors to look at changes in the water of a ham as it cures?  I’ll admit that the idea crossed my mind because in addition to water activity meters, my employer also makes things like soil moisture sensors.  Soil moisture sensors sense changes in soil moisture due to the difference between soil’s dielectric constant (2) and water’s dielectric constant (80).  The readings will be relative since I’d have to calibrate the sensors to relate their readings to water activity or moisture content.  Still, after considering this a while, a few things became clear:

So here’s the plan.  Plunge the TEROS 12 sensor deep into the ham, pack the ham in salt, and wait about 2 weeks.  The ham will lose water and take on salt.  Then, as the ham cures over 5 months to 1 year, it’ll dry out.  I’ll watch the readings change over time, and post them here on the blog.  During that same time, I plan on making some more salami and peperone – I’ll also outfit some of those sausages with sensors so we can see that data, too.  We’ll test the water activity when we think they’re done, but not before.  This will make for less holes in the meat, and more product for me and my co-workers to consume.  I think that’s something we can all live with.