After last week’s powdered milk, I needed to redeem my taste testing reputation. This week we tested something much more pleasant than powdered milk: “Dream Pie.” This is a recipe that uses Dream Whip whipped topping mix to make a whipped topping+pudding pie. 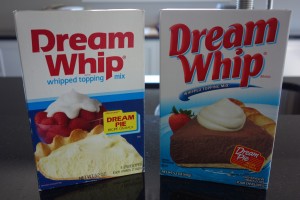 What is “Dream Whip” you may ask? Dream Whip whipped topping mix is a powdered mix that is packaged in 4 envelopes to a box. Blend the stuff with milk and vanilla, and voila, instant whipped topping that kind of tastes like homemade whipped heavy cream but not quite. You can just make the stuff as whipped topping or you can use it as a “fluffing” agent in certain recipes. One application of Dream Whip is cake. My mother is making the cake for my wedding reception and was told to use Dream Whip in the cake mix to make the cake extra moist and fluffy. And of course, Dream Whip is used in the infamous “Dream Pie,” a pie where you blend Dream Whip mix, any flavor pudding mix, milk, and vanilla together and spoon it into a crust to get “lighter, fluffier, Dream Pie.” This lightness and fluffiness added to the pie is explained well by this picture on the back of the older box of Dream Whip: 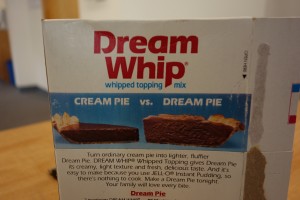 Different from past taste tests, I didn’t have my testers sample just the product itself. Instead I put the product to the test in a recipe to see if the products with different vintages would make any difference in taste and texture in the finished product. 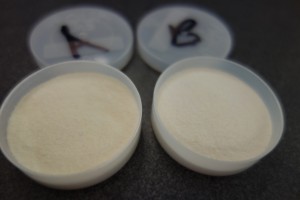 The recipe for Dream Pie was located on the back of both boxes. The wording on each was slightly different, but all the ingredients were in the same proportions. I started by making the older Dream Whip. The box says to “BEAT whipped topping mix with 1 cup milk and the vanilla…at HIGH with electric mixer for 6 minutes or until topping thickens and forms peaks.”  Well, it wasn’t until at least 6 minutes had passed before I had an indication of “peaks” being formed in the older Dream Whip. 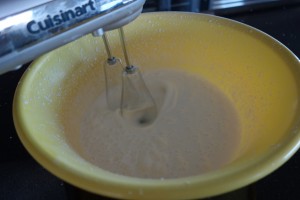 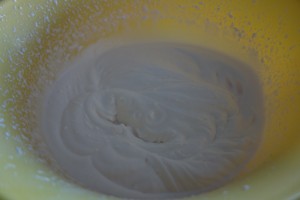 See what I mean? Not super peaky. But maybe you need a comparison. The picture below shows the new Dream Whip after probably only beating 3-4 minutes. For reals. 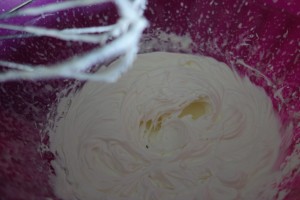 Much more peaky, and took less time. The new Dream Whip was also a purer white than the older Dream Whip.  The older Dream Whip product needed more time to thicken and didn’t get quite as thick as the new product even after getting some extra time to whip.

After I added the pudding mix and the rest of the vanilla, the old and new products were visibly comparable. The old product may have looked a little more grainy and the new one a little smoother, but that was were differences stopped, at least visually. 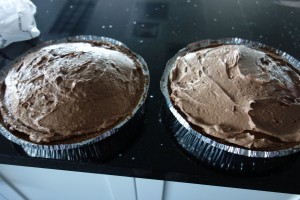 After spooning out the product into the pie crusts I admit to licking the bowls to see if there was a difference in flavor. Even though all ingredients were the same but one, I could taste a difference. The older one tasted somewhat chemical-y, while the new one tasted fresher and creamier. But what’s my opinion to that of my testers? Time to bring a fresh crop of them on the scene!

This week I had the highest participation rate yet for a taste test with 17 people. I guess my powdered milk from last week didn’t scare them away after all. 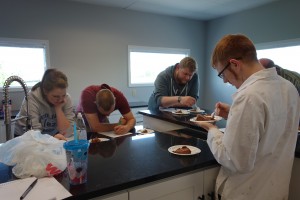 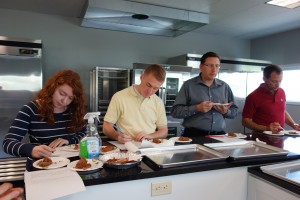 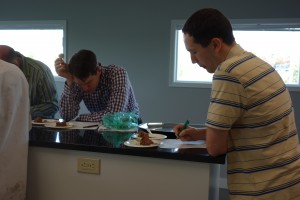 The room was near silent as the testers tasted and took notes on the provided feedback sheets. After a few bites I think it was obvious to most which pie contained the old product and which contained the new. In their ratings, 12 out of 17 preferred product B (the pie using new Dream Whip), while 3 preferred the pie using old product and 2 couldn’t tell the difference, giving their product the same rating.

Comments were a little varied for both pies, but some general trends existed. Many participants noted something odd about the flavor of Pie A with comments like “slight metallic flavor” “strange flavor” “tiny after taste of rubber” “hint of bleach, little more acidic” “a little pasty” and ‘tastes more chemical-y than the other…tastes like plastic…not great at all.” An unpleasant aftertaste was noted by at least three people. Comments varied for texture but some said it was “grainy” “slimy” and “thicker than B.” The ratings for the product weren’t bad, with an average rating of 5.6. Some discrepancy existed though, since the lowest score was a 1 and the highest an 8.

Unsurprisingly, Pie B got many more positive comments than Pie A. Most testers said it was good and/or tasty. My favorite two comments were “Delicious, chocolate-y, lovable, cuddly :)” and “This is how a choco-cream pie should taste. A delightful pas de deux between the chocolate and the graham cracker crust.” (Yeah, the people I work with are pretty cool). Some noted that B was “less chocolate-y than A” “not very flavorful” and “weak” but generally the comments regarding B were positive.  In regards to texture, many noted that the product was fluffy, smooth, and creamy. The average score of B was 7.9, with the highest score being a 10 and the lowest being  a 4.

While some general trends existed to differentiate the two pies, some of my testers weren’t able to tell much of a difference between the two. Comments in this regard included “almost exactly the same” “I’m considering disqualifying myself from future taste testing because I can’t tell any difference in taste” and “visibly these two products are identical and look delicious!”

In conclusion, I think if you were in a pinch to get a dessert ready and didn’t have the time to go the store to get some Dream Whip (or you just wanted to be cheap), you could use Grandma Zollinger’s old Dream Whip mix and probably be just fine. The pie might end up tasting a little off, but without a comparison, who’s going to complain about Dream Pie?