My last post talked about some of the ways we’re going to monitor the moisture of curing meat remotely.  Two days ago, I made good on my promise to impale an innocent ham with two soil moisture sensors and watch their readings over time.  This was intended to do two things: test the concept that meat curing can be observed with an “in-situ” sensor, and also use the electrical conductivity readings to see how the salt migrates into the ham.

Having procured the ham and removed the aitch bone, I began burying the ham in salt.  By the way, can I nominate “aitch bone” for dumbest bone name ever?  I have no idea how to pronounce or spell it, and the bone itself is a nuisance to remove.  After getting a bit of salt going, here’s where I installed the probes: 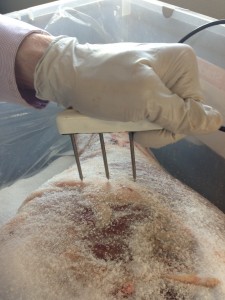 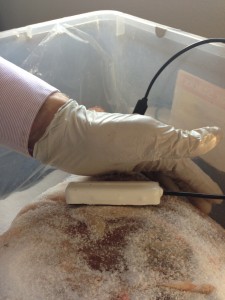 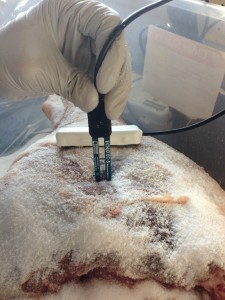 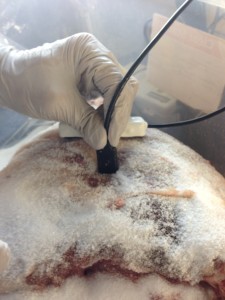 Not rocket science.  After covering the ham with more salt, I socked it away in the fridge to sit for 12 days or so.  Now (2 days in) I already have some data, which I have been looking at from the comfort of my desk.  Here’s a snapshot: 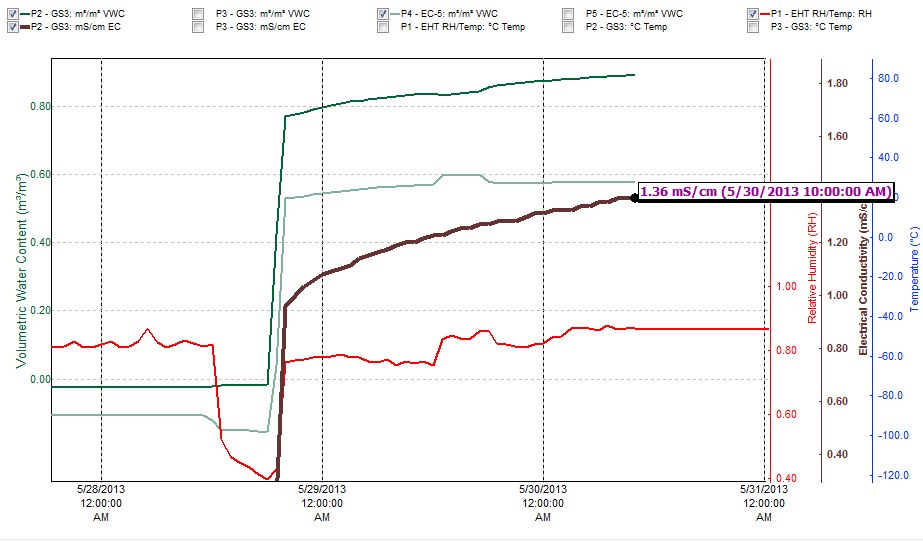 The humidity (red line) is at about 80% – no problem.  The two moisture content lines are showing a little divergence.  The dark green data line is from the metal 3 needle sensor, and the light green one if from the 2 prong shorter sensor.  Moisture shouldn’t have changed that much, though, in only 2 days.  We do expect to see water move out of the ham, though, but this hasn’t really started yet.  The interesting line to me is the dark brown one, which shows salt moving into the ham, increasing its electrical conductivity.  What should the electrical conductivity of the ham be when we stop the salting step?  I’m really not sure, but that’s one of the first things we hope to find out.