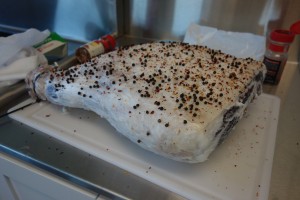 Any time a charcuterie experiment doesn’t go horribly wrong, I’m pretty much satisfied.  So I was happy when I dug the prosciutto out of its mountain of salt and found nothing was amiss.  It had lost some water into the salt, but not enough to actually have liquid present.  Also the flesh and skin both seemed to have absorbed the salt well, but the ham was still squishy.  The exposed meat had taken on some of the translucence of heavily salted protein.   In this picture, I’ve already coated the ham with lard and pepper, and am about to wrap it in cheesecloth per the instructions.

This all brings me to the data – how much “saltier” is our ham than when we started?  The first reading we registered for electrical conductivity was maybe 30 minutes after we put the probe into the ham.  We got a reading of 0.231 mS/cm (don’t ask me about these units).  The last reading we got was 2.49 mS/cm – roughly 10x higher.  If we had left the meat in the salt for a day per pound (as Ruhlman suggests), I think we would have had 10-15% more salt in the meat.  Not sure if that will make a difference but we’re taking the ham out of the salt about a week earlier than the recipe suggests.

Here’s what our probes are telling us: 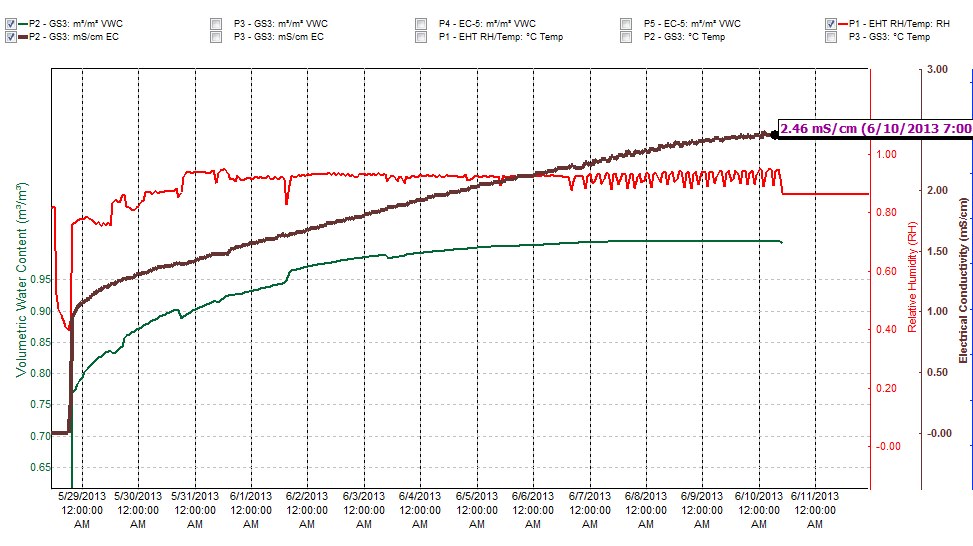 The brown line is the “saltiness”, and you can see that while it increased the entire time the probe was in the ham, the rate at which the salt went into the ham was steady, and then began to decrease on day 10-11.  This may be because the probe doesn’t extend all the way to the bone, or it could just be that the ham wasn’t taking on much salt at that point.  You can also see the green line saying that the moisture content of the ham is increasing.  It wasn’t.  Rather the massive salt invasion into the ham was affecting the moisture readings.  Since the ham was actually losing water during this time, we know the actual moisture content was decreasing.  As the salt content began to stabilize, so did the moisture content readings, and there was even a small decline recorded, something we anticipate seeing more of during the full year the prosciutto will be curing.  Here’s how it looks all tucked in for a year long slumber (with probes re-installed): 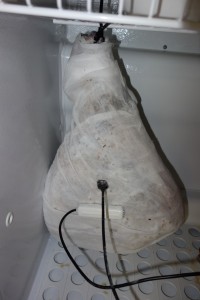