Bean There, Done That

There is no substitute for experiencing a product first-hand.  In our case, that meant mixing up 5 batches of ice cream to test whether I’d been ripped off by some vanilla beans I bought on Amazon.  Per my previous post, when I ordered a bag of 20 vanilla beans from Amazon for $25, it seemed too good to be true.  The first sign of trouble with these beans was their water activity: 0.98 upon arrival.  Although I dried them out (down to 0.88 water activity units), which prevented mold, but then the beans didn’t seem to add any flavor to the products where they were supposed to be used.

For my next step, I ordered some “real” vanilla beans.  I’ll call them “real” because the ones I got were similar in appearance and texture to the vanilla beans I got from Costco, and have loved in the past.  They also cost from $3-4 per bean.  I cut up one to test its water activity when the beans arrived.

No contest: the real beans had a far lower water activity value of 0.86.  This indicates that these beans are a totally different product than the Amazon beans, which were soaked in something strange before then came to us.

I decided to make 5 batches of ice cream, all with the same recipe.  The only difference would be the vanilla, and I would either use 2 tsp of vanilla extract, or 2 vanilla beans, when called for in the recipe.  The recipe is here – an Alton Brown classic.   The five batches would be:

Here’s what the ice cream looked like when it was done and had hardened in the freezer: 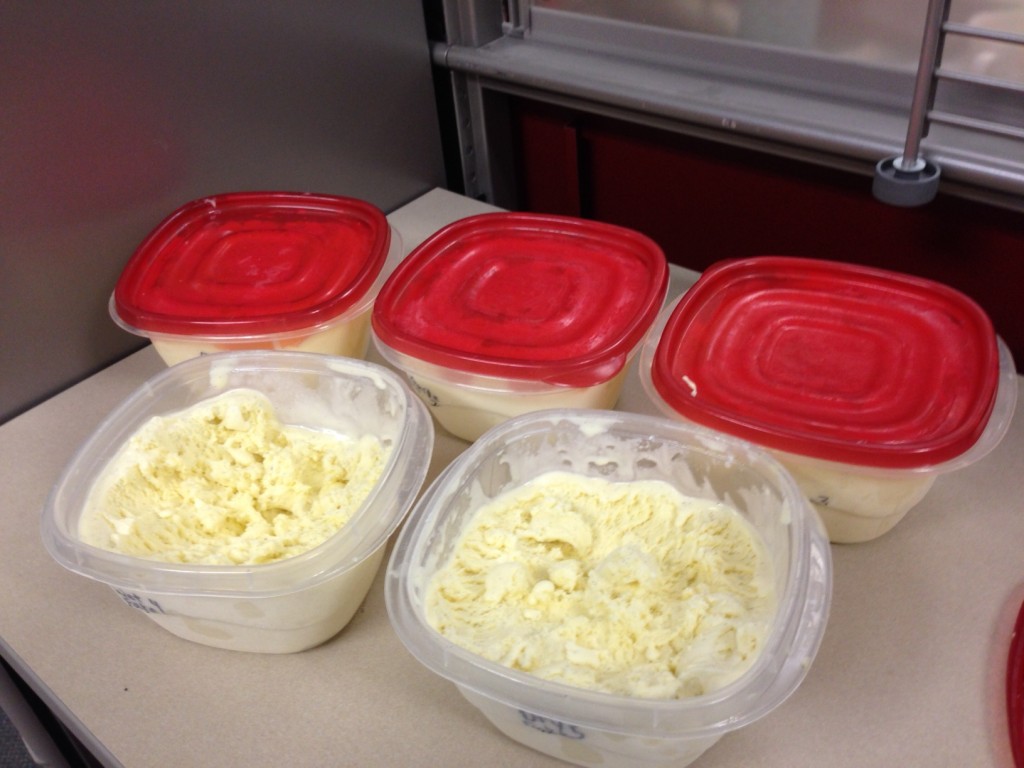 I then organized a taste test panel comprised of 12 employees of the company where I work.  Their feedback provided another unexpected twist in the vanilla saga.  The averaged scores were (from high to low

With only 12 participants, some of these scores are statistically indistinguishable from others.  But it’s fascinating that the dried Amazon beans have the highest score, while the Amazon beans when used straight from the bag have the lowest score.  Taste testers complained that the Amazon wet beans made the ice cream taste like chemicals, and left a lingering off-flavor.  I’m going to guess, though, that testers reacted to both what they saw and what they tasted.  Custard, made of egg yolks, cream, half and half, and sugar, tastes pretty darn good all by its self.  If you’re going to mess with that flavor, I think you have to improve it, which is what the real vanilla beans did.  In the case of Amazon vanilla beans, I think there was little impact on the flavor, but they gave the dish an appearance of having real vanilla beans.  That seems to be the winning ticket.  We had 2 testers with a lot of culinary experience, and those two both picked out the real vanilla beans ice cream as the clear winner.  I think the real vanilla packs the most powerful punch, too, but I knew which batch was which, and was probably biased.

Time for a brief summary.  I think the Amazon beans may be useful as a way to show you used real vanilla, but they must be dried, and have little flavor if you actually do that.  What’s more, they make your dessert taste like chemicals and create a mold hazard if they aren’t dried.  That’s not much of a bargain at any price.